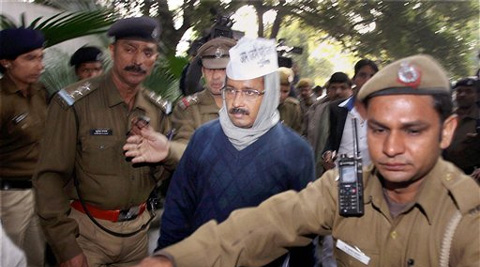 “He has been given Z category cover which includes Delhi Police’s armed commandos. They will be around 30 in number,” a Delhi Police officer told IANS.

“The security was deployed soon after his appointment as the leader of the AAP legislature party,” the officer said.

A pilot car followed by two escort vehicles carrying security personnel will accompany Kejriwal, the chief of the Aam Aadmi Party (AAP), during his movement around the clock.

Kejriwal is set to take oath Feb 14 at the Ramlila ground after the AAP swept the Delhi elections by winning 67 of the 70 seats.

Delhi Police has been providing Z category security to Kejriwal since last year — when he was elected the chief minister, the official said.

“In spite of Kejriwal’s refusal to accept security, we have been providing him the facility since last year when he was elected Delhi’s chief minister,” he said.

As per protocol, the Delhi chief minister enjoys Z category cover due to the threat perception and the number of security men on duty could go up.

When he resigned from his post, Delhi Police continued the same Z category security, but only when Kejriwal was under its jurisdiction.

Kejriwal, who lives in Ghaziabad, is currently protected by 12 police personnel, including an escort vehicle of the Uttar Pradesh Police.

Delhi Police has already conveyed to its counterparts in Ghaziabad about the security arrangements made for Kejriwal.

After he takes oath Saturday, other facilities such as deployment of traffic police motorcycles for clearance of roads for his convoy will be provided.

The AAP leader had, last time, not agreed to the security measures but the Delhi and Uttar Pradesh Police had suo motu made arrangements for his security.