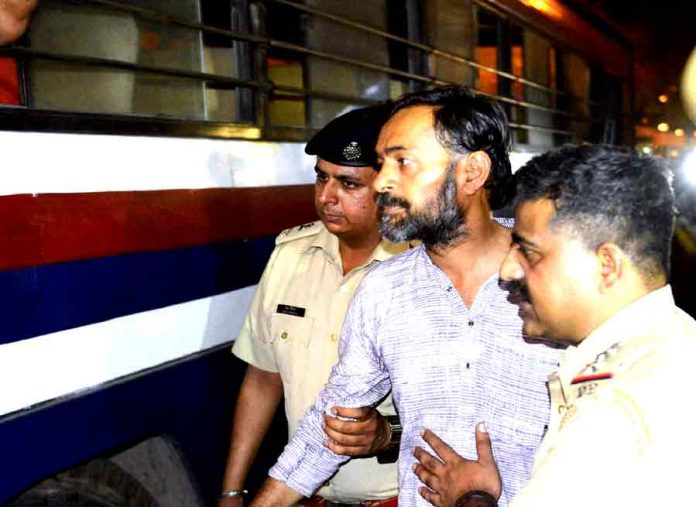 In a development that took the police by surprise, the Delhi High Court expressed displeasure after Yadav and other protesters were produced before a special executive magistrate in a police station several hours after being detained from Jantar Mantar in the heart of Delhi.

“Why have they been produced so late? Why are you producing them now?” the high court court questioned the police officer after he said that 83 people were detained at 1 a.m.

During the hearing in the high court, at about 4.15 p.m., police said all the protesters had been let off after being produced before the magistrate at the Mandir Marg police station.

The magistrate quashed the charges framed against Yadav and others.

Yadav, who was in police custody after being picked up for protesting against the land bill, accused the police of threatening to kill him, a charge they denied. He also alleged that he was first roughed up, then beaten up in the police station.

“I am happy we have been cleared of all the baseless charges,” an elated but hassled Yadav told the media after emerging from the police station in the evening.

“The SHO (station house officer) of Parliament Street police station threatened to kill us. He said ‘maar maar kar bharta bana doonga’ (I will make mincemeat of you),” Yadav said.

Yadav and 82 activists were booked on charges such as breach of peace, disturbing public peace and unlawful assembly. Police officers also told the media that Yadav and his supporters were planning to march to Prime Minister Narendra Modi’s residence.

They were demanding adequate compensation for farmers affected by the proposed land bill as well as those hit by crop loss.

Yadav’s colleague and Supreme Court lawyer Prashant Bhushan said the arrest showed the “dictatorial tendencies” of Delhi Police, which he said was working at the behest of the Narendra Modi government.

“I strongly condemn the treatment meted out to Yogendraji by Delhi Police,” Kejriwal said. “They were protesting peacefully. It is their fundamental right.”

It is the first time Kejriwal has come out publicly in support of Yadav since Yadav and Bhushan were ousted from the Aam Aadmi Party shortly after it took power in Delhi in February.

Bhushan welcomed Kejriwal’s support. Yadav added: “Whoever loves democracy and rule of law is with us.”

The sole AAP legislator from Delhi who remained with Yadav amid the drama was Pankaj Pushkar, who is known to be close to Yadav and Bhushan.

But Kejriwal loyalist Sanjay Singh was booed away by Yadav supporters when he went to the Parliament Street police station to express solidarity with the arrested men and women who included activsits from other states.

“I came to support Yadavji. But they (protesters) want us to go back, I am going back,” Singh told reporters.

Bhushan was scathing in his attack of the government.

“This (arrest) shows the dictatorial tendency of Delhi Police. It also shows that they are (taking orders from) top political bosses,” he added.

The eminent lawyer said the police did not explain why they were being arrested.

“I was not allowed to enter (the police station). It is our constitutional and fundamental right to meet a person who has been detained,” he said earlier.

Bhushan then filed a habeas corpus petition which, after Yadav’s release, was disposed off by judges Kailash Gambhir and P.S. Teji of the Delhi High Court.

Bhushan also sought an inquiry against the police personnel who arrested Yadav and his colleagues.