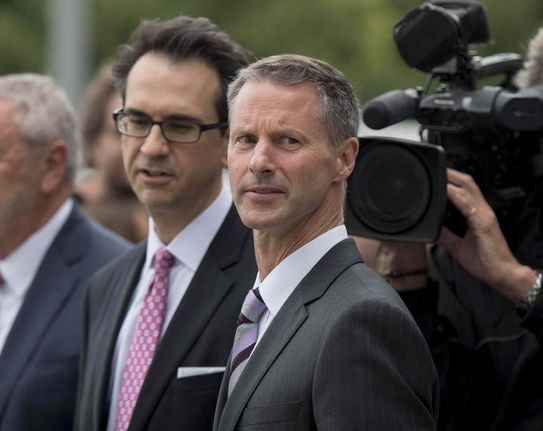 By Allison Jones, The Canadian Press

If Stephen Harper was holding out even the slimmest hope that the federal election campaign might overshadow the ugly revelations of the Mike Duffy trial, it surely vanished on Thursday.

As Harper gave repeat answers to fresh questions about the witness-stand revelations of his former chief of staff, Justin Trudeau made his first promise of the Liberal campaign: a cash infusion for First Nations education.

And with his ethics point man Charlie Angus securely esconced at the courthouse in Ottawa where Nigel Wright’s cross-examination was unfolding, NDP Leader Tom Mulcair stayed entirely out of the fray.

Trudeau, campaigning in Saskatchewan, promised a Liberal government would spend $515 million a year more in core annual funding for First Nations education, rising to over $750 million a year by the end of the mandate.

There would also be $500 million over three years for aboriginal education infrastructure and an extra $50 million for a fund to help indigenous students with post-secondary studies.

“First Nation students are falling behind in reading, writing, and numeracy, and less than half of all First Nations students on reserves graduate from high school,” Trudeau told supporters at a downtown Saskatoon hotel.

Trudeau’s announcement provided only a brief respite from the intrigue unfolding in the national capital, where Wright generated new revelations _ and ever more questions _ about the ill-fated efforts in the Prime Minister’s Office to contain the cascading Duffy expense scandal in 2013.

Pressed on the matter again Thursday, Harper repeated himself: no one told him Wright had given Duffy $90,000 to repay his expenses.

And the prime minister sidestepped a pointed question about why he signed off on a plan to instruct Duffy to deceive the public in media interviews about where the money actually came from.

Harper, who has been leading the way in policy announcements, took a breather on that score Thursday and instead talked up his government’s tax-free savings accounts _ a savings tool his opponents would love to do away with, he warned.

The NDP and the Liberals see those tax-saving opportunities as taking money away from government, Harper said.

“The money doesn’t belong to the government, it belongs to you. That’s our philosophy.”

Thursday was a quiet day for Mulcair, who spent the day making a fresh batch of campaign ads. He was expected to make noise Friday in Toronto, however, with what the party was billing as a “major economic announcement.”

Of course, resonance on the campaign trail isn’t measured in decibels. If it was, Thursday’s winner would have been Montreal Mayor Denis Coderre.

A former Liberal cabinet minister, Coderre took a jackhammer to a concrete foundation for a community mailbox at the entrance to a Montreal nature park as he tried to put the end of home mail delivery on the campaign agenda.

“I want to know exactly what (the federal leaders) are going to do with Canada Post,” Coderre said.

Ceci noted that Harper hasn’t balanced a budget since 2008 and added $150 billion in debt.

“These kinds of results seem to be in their DNA,” Ceci said in a statement.