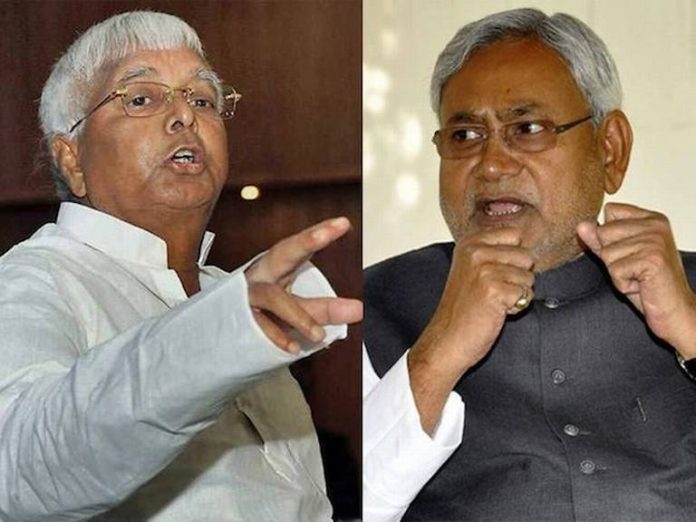 New Delhi/Patna, June 8 (IANS) After days of talks brokered by Samajwadi Party leader Mulayam Singh Yadav, the Janata Parivar finally announced on Monday that Chief Minister Nitish Kumar will lead the assembly battle in Bihar with the support of foe-turned-friend Lalu Prasad. In wake of Nitish Kumar’s announcement as the chief ministerial candidate of JD-U-RJD-Congress combine for the upcoming Bihar assembly polls, the BJP is a dilemma whether it should also announce its candidate for the top post or bank on Prime Minister Narendra Modi’s popularity.

Mulayam Singh made the much-awaited announcement in New Delhi where Rashtriya Janata Dal chief Lalu Prasad declared that no one from his family was keen on being the chief ministerial candidate.

“It is the need of the hour that we all get united to stop the BJP,” Lalu Prasad, who cannot run for office due to his conviction in a corruption case, told the media.

“I assure secular powers… we are ready to make all sacrifices for this battle. I will drink poison but will defeat the communal forces,” said the former chief minister.

Mulayam Singh said: “I give special thanks to Lalu Prasad that he suggested Nitish Kumar’s name for the chief ministerial candidate.”

In Patna, Nitish Kumar affirmed his JD-U’s alliance with the RJD. He said the Congress too would be part of the alliance to take on the Bharatiya Janata Party.

“There is no difference or any dispute with the RJD and Lalu Prasad over the alliance. The JD-U and the RJD along with the Congress will contest the elections together,” he said.

Nitish Kumar said his meeting with Congress vice president Rahul Gandhi on Sunday in New Delhi over seat-sharing was a positive one.

The BJP and its ally, the Lok Janshakti Party (LJP), dismissed the RJD-JD(U) alliance.

BJP leader Rajiv Pratap Rudy said his party was on a strong wicket in Bihar and didn’t care for Nitish Kumar and Lalu Prasad.

“An alliance that is not cohesive has been announced and is set to collapse,” he said.

Another BJP leader Ravi Shankar Prasad recalled that the RJD-JD(U) alliance was trounced in the Lok Sabha election. “They have joined hands in frustration, they will learn their lesson.”

LJP chief Ram Vilas Paswan warned that the alliance was bound to break.

“Someone should ask Mulayam Singh, which party he heads? Who is he to announce the chief ministerial candidate? It is a drama,” said Paswan, who ditched Lalu Prasad and embraced the BJP before the 2014 Lok Sabha polls.

Paswan claimed that the BJP-LJP combine would sweep Bihar in the election likely in September-October.

Until Monday’s announcement, there was intense speculation that Lalu Prasad was opposed to Nitish Kumar’s projection as the chief ministerial face.

But with the Congress and the NCP publicly favouring him, Mulayam Singh managed to persuade a reluctant Lalu Prasad to fall in line.

Monday’s decision will be followed by tough negotiations over who will contest how many of the 243 seats in Bihar.

Asked about it, Lalu Prasad said: “We will sort out any differences that emerge.”

On Monday, the Congress said it was yet to decide its stand in Bihar. But spokesman Randeep Surjewala said: “We favour an alliance of anti-BJP parties.”

BJP’s poll debacle in Delhi has sent the leadership guessing whether to bank on Prime Minister Narendra Modi’s image or to go with a popular face from the state only.

Since the BJP’s state unit leadership does not have any match to the stature of Chief Minister Nitish Kumar, the central leadership is in a bind over the issue.

Inputs from central leadership clearly indicated that party is not going to repeat the Delhi experiment, where former IPS officer Kiran Bedi was declared the party’s chief ministerial candidate at the very last moment. Till then, the party had banked on Modi’s charisma.

If the party decides to go in elections with a face, it will have the option to select its chief ministerial candidate only from within the party’s state unit. Even the RSS has suggested the party honour its cadres hard work and sacrifices rather than imposing leaders from outside.

“Party insiders feels that it will be better for the party if it decides to go on Maharashtra and Haryana formula, where party banked on Modi and won handsomely,” a central functionary of team Amit Shah told IANS on condition of anonymity.

If the BJP decides to go in the elections with having declaring its chief ministerial candidate, there will be possibility of increasing infighting which may hamper the party’s prospects, he added.

“Our parliamentary board will decide the issue as and when required,” Prasad told reporters when asked whether BJP will bank on Modi’s popularity or will announce its chief ministerial candidate.

However, he denied that that he is in race for the top post. “I am not interested at all,” he said.

Making light of the opposition combine, he said: “Nitish wants to develop Bihar with Lalu Prasad, the man who ruined Bihar. People of Bihar want change and so they will vote for change and development this time.” .

BJP ally, Lok Janshakti Party chief Ramvilas Paswan has already denied that he is in the race for the post.

Ho told reporters in Mumbai that Prime Minister Modi will decide about the chief ministerial candidate of the NDA.