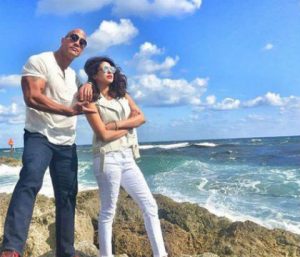 It seems there’s nothing that PRIYANKA CHOPRA can not do! Ever since it was announced that she’ll star along side DWAYNE JOHNSON (The Rock) and ZAC EFFRON in Seth Gordon directed BAYWATCH, the big screen adaptation of much loved 90’s TV series, her phone has ‘been ringing non-stop and almost all Bollywood celebrities were tweeting to show their support for Priyanka, who seems to keep surprising her fans with more and more accomplishments. Recognised as one of the leading film stars of Bollywood, she made an impressive entry in singing and her singles were well received by all, and then startled all by becoming the lead of ABC’s TV series QUANTICO and winning the People’s Choice award. Presenting awards at People’s Choice awards & Screen Guild awards, she’s been announced as one of the presenters at this year’s Oscars, which is a rare first for any Indian and now grabbing the main villain role in upcoming BAYWATCH is like a dream come true. We certainly hope that her dream run continues and she keeps winning more laurels for India as she joins DEEPIKA PADUKONE in Hollywood and sincerely hope that she keeps doing Bollywood (There was a rumour recently that she may move to Hollywood!) as well because Hollywood’s gain should not be at the expense of Bollywood!

DELHI’s prestigious HANSRAJ COLLEGE had an unending stream of students from all over Delhi University and they’re all there to watch their heartthrob SHAHRUKH KHAN receive his BA Economics degree after 28 years and they’re not disappointed as SRK entertained them all with his trademark poses, wittiness and dancing to his recently released song from Yash Chopra’s film FAN and what a day it was as ABVP students made an attempt to disrupt the proceedings but were drowned out by the massive outpouring of support from all students. HANSRAJ COLLEGE sure has reason to celebrate as AMITABH BACHCHAN also graduated from the same college years ago!

Fitoor Could Be a Bigger Disaster Than Bombay Velvet!!!

RANBIR KAPOOR & KATRINA KAIF may have split but they could give each other solace as Katrina Kaif’s latest film FITOOR is said to be a bigger flop than Ranbir Kapoor’s BOMBAY VELVET. Much was expected from Abhishek Kapoor’s FITOOR, an adaptation of Charles Dickens GREAT EXPECTATIONS, and with a stellar cast of TABU, KATRINA KAIF, ADITYA ROY KAPOOR, AJAY DEVGUN & ADITI RAO, it was supposed to easily cross Rs.30-35 Crores in the fir

st weekend, however, the film struggled from day one and could only manage Rs. 20 Crores in the first week and an absolute certification of FLOP.

Meanwhile, Divya Khosla Kumar’s SANAM RE team celebrated the success as the film easily pipped FITOOR at the box-office and made over Rs. 28Crores but all eyes are on Sonam Kapoor, Shabana Azmi, Shekhar Ravjaani’s NEERJA, Tips Films LOVESHHUDA with GIRISH & NAVNEET DHILLON, ISHQ FOREVER, DIRECT ISHQ & Punjabi film CHANNO opening this week. Tickets for SHABANA AZMI-JAVED AKHTAR-JASWINDER SINGH’s musical play KAIFI AUR MAIN at HARD ROCK CASINO on FRIDAY, APRIL 8th,2016 @ 8.30 PM are out and selling fast and with that, it’s time to say goodbye but not before reminding you to watch this week’s YAADEIN on yesteryear actress NIMMI JI on Sunday, Feb.20th @ 1 pm on SMC#116 as her fans celebrated her 83rd B’day on February 18th!

The ten habits of great leadership – By Eamonn Percy

What are Common and Costly Bookkeeping Mistakes? – By Dawn Loeffler