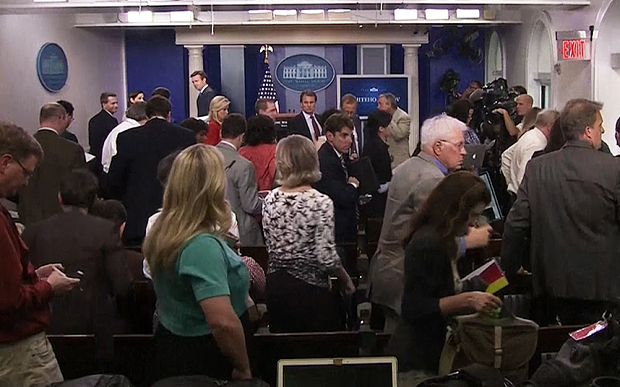 Washington, June 10 (IANS) The US Secret Service interrupted the daily press conference of White House spokesperson Josh Earnest in order to temporarily evacuate the briefing room and one of the gardens of the presidential residence because of a bomb threat phoned to police that later proved to be a false alarm.

Reporters covering the press conference were moved to a street separating the White House from the Eisenhower Executive Office Building, after President Barack Obama’s spokesperson told them to leave the briefing room.

A team of Secret Service agents inspected the room using dogs trained to detect explosives, and about half an hour after the evacuation, reporters were able to return to the briefing room and the press conference resumed.

“Shortly before 2 o’clock today a telephonic bomb threat concerning the room that we are now all in was called into the Metropolitan Police Department. The local police department contacted Secret Service officials who determined that for the safety of all of us they needed to evacuate the room and then to sweep it,” Efe news agency quoted Earnest as saying after the press conference resumed.

He said the Secret Service was able to quickly check out the room and conclude they were in no danger.

The White House spokesperson said the evacuation only affected the press briefing room and no other part of the presidential residence. It did not affect President Obama, who was in the building at the time.

The evacuation took place just hours after a hearing in the US Senate on the Transportation Security Administration, or TSA, was also evacuated when police in the Capitol received a previous bomb threat.

Earnest said he had no information about whether the two bomb scares could have been related.