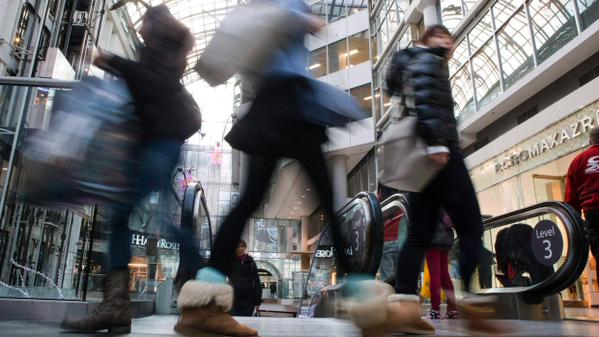 By David Friend, The Canadian Press

Toronto: The rise of so-called precarious employment in Canada, mainly work in the services and retail sectors, has brought with it some questionable employer practices that have employees stressed out and labour activists fuming.

They’re calling for the elimination of “on-call” shifts, a practice where management schedules shifts for part-time employees each week, but then requires them to call in ahead of their start time to find out if they’re actually working.

“It’s really quite troubling from a ‘good jobs’ perspective because it sometimes forces people into financial turmoil,” said Andrew Langille, a labour lawyer based in Toronto.

“This is a growing problem for young workers in their 20s and 30s who make up a significant chunk of retail and service workers. I’ve seen pretty high rates of mental health issues among this group of workers. It also drives stress and anxiety to a pretty high degree.”

In recent months, lawmakers in the United States have taken notice of a growing discontent with volatile workplace schedules.

In April, New York attorney general Eric Schneiderman sent a letter to a group of large retailers asking for more details on how they operate “on-call” shifts. He also questioned whether forcing employees to adhere to “on-call” scheduling was legal.

Schneiderman’s symbolic gesture sent ripples through the industry and pressured several large U.S. retailers to change how they book their staff hours.

Both Abercrombie & Fitch and Victoria’s Secret announced plans to discontinue “on-call” shifts shortly after the letter was sent.

Gap. Inc. joined the group last month by saying it would phase out “on-call” shifts across all of its North American stores by the end of September.

In Canada, similar changes for worker rights are harder to come by, though there have been some inroads in recent months.

This summer, Unifor, the union representing Metro employees at stores in the Greater Toronto Area reached an agreement with management to give staff more predictable schedules. The deal also guarantees part-timers a minimum of 15 hours of work after working for one year.

Changes have also been made at some Loblaw stores in Ontario as well.

The supermarket chain reached an agreement with the United Food and Commercial Workers for a pilot project at its 60 Great Food and Superstores locations in the province. Under the plan, some employees will get more reliable weekly hours and everyone more advanced schedule notice.

But the new standards at Loblaws don’t cover all staff members, and that has left some employees frustrated.

One staff member from Ontario, who asked to withhold her name over concerns that she may be fired for speaking out, said Loblaw has shifted pressure to its newer employees and that has taken a toll on her family.

“You put everything else in your life on hold in the hope that you will get lots of hours,” she said, noting that her Loblaw store isn’t part of the new pilot project.

Under the current structure, the woman said managers require she keep Friday to Sunday clear, just in case they need her to work. Usually, though, they will only put her on the schedule for as little as four hours over the weekend stretch, she said.

“You can’t find another part-time job because what kind of availability are you going to give them?” she said.

The volatile scheduling practices have affected her personal life as well, leaving both her husband and 10-year-old son at the mercy of her employer. Several times friends have been visiting when her manager calls with a shift, and because she needs the hours so badly, she’ll take them on a moment’s notice.

“It’s very embarrassing when you’ve invited somebody but you can’t be here,” she said. “My husband has to entertain those people.”

In Ontario, complaints about lax workplace guidelines have pushed the Liberal government to launch a formal review of provincial labour laws with an interim report due early next year.

Those findings can’t come soon enough for Emily Norgang, a senior researcher at Canadian Labour Congress, an umbrella organization for labour unions and other interest groups.

“Of the new jobs created in the past five years more than half are precarious jobs,” she said.

“The recession really has just worsened the situation. Now we have this pool of unemployed workers and so it’s a lot easier for employers to overhire and then keep workers on call.”

Determining how many Canadian employers utilize “on-call” shifts is difficult because companies aren’t required to report those types of labour practices, which are especially common in the food services industry and grocery stores.

A spokesman for Tim Hortons said its head office staff “do not have great visibility to the restaurant owners’ scheduling practices” of its franchisees, but that the company believes “on-call shifts are not the norm” across its operations.

Department store Hudson’s Bay Co. says they’ve made a conscious effort to avoid “on-call” scheduling and created their employees’ schedules weeks, if not months, in advance.

While working as a server, stability has frequently been a challenge for Ottawa resident Aaron Quinn, who spent seven years at a restaurant which expected him to work at least one “on-call” shift each week.

Quinn was expected to contact the restaurant each afternoon he was scheduled for an on-call shift to find out whether they actually wanted him to work.

“They could say, ‘Yes we need you’ or they could say ‘No,”’ he said. “More than anything, I would not get the shift.”

To accommodate his employer, Quinn made the rest of his life secondary _ including his college education.

Most weeks he would duck out of afternoon classes to call the restaurant and see if they wanted him to work later that evening.

The unpredictability impacted assignments at school where his classmates would never be certain if he’d show up for group projects, he said, and weekend trips to Toronto hinged on whether he would be called in on a Friday night in the final hours before his shift was to start.

On the schedule, when factoring in the on-call shifts that never materialized into actual hours, a 40-hour work week could sometimes fall hours below what it looked like on paper, Quinn said.

What’s still undetermined is how retailers will respond as trends shift towards more predictability in work hours for employees.

Retail analyst Brynn Winegard says the industry has grown accustomed to using staff to “ladder-up and ladder-down” in peak times.

“If they can’t call in new employees to help service demand or send people home, they’re going to have to err on the side of less employees in the interest of costs,” she said.

“I think we’re going to see a lot more places that are understaffed.”

Can a cup of hot tea every day keep glaucoma away?