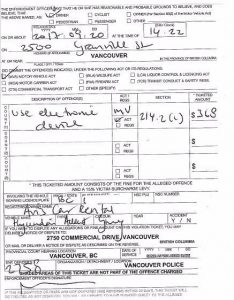 Since the launch of the Provincial Distracted Driving campaign on September 1st, VPD officers have written 1,969 tickets to distracted drivers throughout the city of Vancouver.

The purpose of the campaign was to educate motorists and discourage the use of mobile devices while driving. The high number of tickets written during the campaign proves distracted driving is still a problem on Vancouver roads. Distracted driving has shown to be one of the leading contributing factors of traffic fatalities in B.C. – even surpassing impaired driving.

“If you know someone who just won’t give up their phone while driving, maybe you can have some influence,” says Sergeant Jason Robillard of the Vancouver Police. “We have at least 1,969 reasons to remind our loved ones to pull over or leave the phone alone while driving.”

This past month, front line officers have heard and seen just about everything when it comes to excuses for distracting driving – from a man justifying his actions because he was watching his financial video from his website, to a woman who though it would be ok to have her cell phone on her lap while she ate her lunch with both hands.

“The ticket amount for using an electronic device while driving in BC is $368,” says Sergeant Robillard. “But that cost is nothing compared to the cost of losing a loved one. It’s time to take a break from your phone.”

Japan mulls prisoner swap with IS to save hostage?