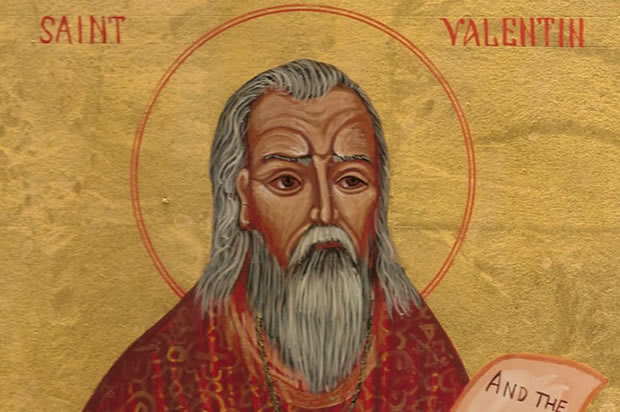 Every 14th of February there’s a delightful semi-holiday that can either be a great deal of fun, or if you forget, a great deal of grief. I’m talking about Saint Valentine’s Day.

It’s the day on the calendar when lovers are supposed to express their feelings with cards, candy and flowers, and in this day and age when the pace of life is so frantic, a pause such as this can only be a good thing to keep us guys out of the dog house and maybe off the couch.

But where did this celebration start and who is Saint Valentine anyway?

The celebration goes back to what is described as one of the most ancient of Roman holidays known as Lupercalia (celebrated on February 15) and concerns the founding of Rome and the legends of Romulus and Remus who, like of Mowgli of Jungle Book fame, were also raised by wolves. But that’s another myth. Suffice to say that about the time the Christians were getting started, a priest in Rome, named Valentine, ran afoul of Emperor, Claudius, lovingly nicknamed Claudius the Cruel, who believed married men were more interested in staying home with the Missus, instead of joining the army, so he banned marriage. Regardless, Valentine continued to perform marriages in defiance of the ban so Claudius, who had the disposition of a wolverine and wasn’t playing with a full senate, sentenced poor Valentine to be beaten to death with clubs and to have his head cut off. Harsh!

Ultimately the good guys won. In 496 AD, Pope Gelasius put an end to the Feast of Lupercalia, declaring that February 14 be celebrated as St Valentine’s Day, and over the centuries, it became the date for exchanging love messages, poems and simple gifts such as chocolates, flowers, dinner, diamonds, Mercedes-Benz cars, homes, alimony and so on.

There’s yet one more ‘mything’ link. Who is Cupid, why is he portrayed as a fat baby with wings, and who is he shooting with that bow and arrow?

Cupid is the mythological God-child (God of Desire) of the Roman Goddess of Love, Venus (mother), and his father, Mars who is the Roman God of War. It only stands to reason that the result was the war of the sexes (I figured that out on my own)!

Cupid had two sets of arrows, one with sharp golden tips which when shot into the heart afflicted the target with uncontrollable desire. The other arrows were tipped with lead, which put the victim into a state of aversion causing the individual to flee in a state, which became known as “Cold Feet”!

So over time the pursuit of love, liberty and bad poetry have brought us to today, when every February 14th we recognize our school mates, soul mates, first mates (naughty or nautical) with a love token, bitcoin or bouquet of roses, long-stemmed and red (unless you’re from Texas in which Yellow is just fine) and love can bloom.

I’ll finish up with some modern wisdom on the subject, while I slip out to get a gift before I forget, and who needs that kind of pain?

Actress Joan Crawford said: Love is a fire. But whether it is going to warm your hearth or burn down your house, you can never tell.

Charles Schultz (alter ego to Charlie Brown) nailed it: All you need is love. But a little chocolate now and then doesn’t hurt.

So remember this touching song lyric as you plan your Valentine evening; when the moon hits your eye, like a big pizza pie, that’s amore, con le acciughe (with anchovies).

Clearing the air on cannabis, driving and the holidays