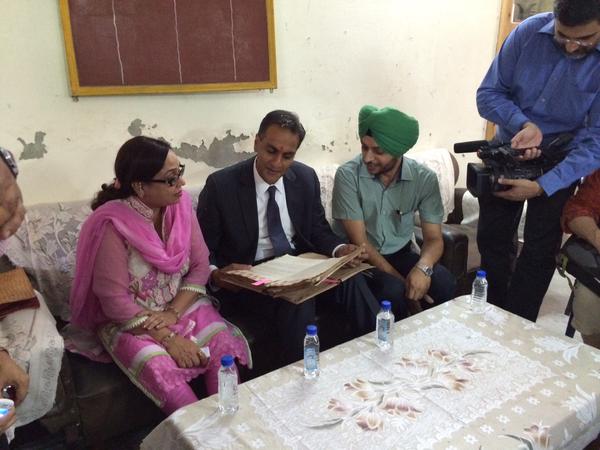 Jalandhar, May 21 (IANS) It was a trip down memory lane for US Ambassador Richard R. Verma, whose visit to his maternal grandmother’s house in Punjab turned emotional on Thursday.

As he stepped in the house in the narrow lane of Basti Sheikh in old Jalandhar, now owned by couple Rakesh Gupta and Priya Gupta, his immediate response was: “Wow.”

Later, he met the occupants of the house, where Verma’s grandmother Maya Devi grew up. It was purchased by the Guptas three decades ago.

“We were really excited when we met the dignitary. He was quite polite and seemed down to earth. He stayed with us for almost 20 minutes,” Priya Gupta, house owner, told reporters.

The ambassador interacted with the grocery shop owner Shri Ram, 82, who had helped him in locating his grandmother’s house.

Verma had visited the locality once in his childhood also.

Celebrations were evident through drums and the ambassador was accorded a lively reception by the locals on the second day of his Punjab visit.

The ambassador later visited Apara village, some 50 km from the district headquarters, where his father K.D. Verma hails.

AAP surging ahead in Delhi, celebrations begin at party office