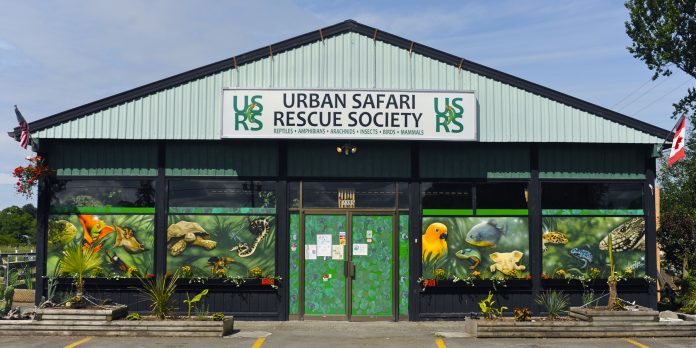 Surrey: Just a few minutes north of the US border on Highway 15, is a large low building with a jungle motif painted on the front. The sign says it’s the Urban Safari Rescue Centre, but it’s much more than the name implies. It’s one of the most interesting attractions offered to visitors and residents of Surrey alike, yet it’s still working hard to raise its profile.

Behind the doors, is a sanctuary for rescued exotic animals, an educational facility that hosts over 500 school visits annually, conducts outreach to hospitals, Make a Wish foundation, Scouts, Guides and anyone interested in learning about the more exotic wildlife around us.   It is also a centre to formally instruct people in the profession of Zookeeping, as well as introduce the subject to thousands of children at their summer and other seasonal camps.

The Urban Safari Rescue Centre is an evolution of a life’s work in the field by creator and founder, Gary Oliver.

“I’ve been dealing with animals since I was a kid,” he said, “volunteering in museums including the Royal Ontario Museum in Toronto and worked in stables, doing anything I could, pet stores you name it. If it had animals in it, I was there. I eventually got into horses and ended up riding with the Governor General’s Horse Guard. At one point, I rode escort, right beside the carriage with the Queen, the Queen Mother and dignitaries in an open carriage.”

From there he worked with the new Toronto Zoo, while it was setting up.

“I was hired to ride around the zoo, rescuing animals that were escaping from their new compounds. The baboons were especially troublesome because they could jump the moats. I had to chase them back into their compound. I followed that with an Arabian horse farm, went totally broke, and that’s when I moved to the west coast where I worked as an artist and fashion photographer for about twelve years, running the biggest arts studios in BC.”

During this period Oliver got the idea of starting an animal agency for the film industry.

“Someone gave me the idea of using my cat in some of the fashion shots.” said Oliver. “He absolutely loved having his photo taken. It became so popular that almost every model wanted my cat in their shot, so I went looking for an agent for the cat. There were two animal agents in LA and one in New York, but nothing in Canada. So I opened up an animal agency in Vancouver, a zoo for cinema, which I named the Cinemazoo.”

He ran the agency for twenty years in Vancouver to north Surrey. In 2009, dramatic rent increases put the operation in jeopardy and it moved to the building that housed the defunct Reptile Refuge, where they are now.

“This new location is far better for tourists,” said Oliver. “At the Whalley facility, we’d get two or three tours a month, but here on Highway 15, close to the border, they’re coming in all the time.”

The next critical step in rebuilding was to focus more on the business side.

“We realized that we needed more professional help. We got a proper accountant and then Sharon Doucette, who had been a volunteer, came on as the Executive Director. She knew about administration and managing the books, and has been an incredible asset to getting this company to where it is now.”

Doucette, a 25 year career photo journalist (including The Now Newspaper) met Gary when she was assigned to do a story on the Cinemazoo. Interested, she began volunteering, and it grew from there.

They formally revamped the Urban Safari Rescue Society and clarified its mission; to rescue exotic animals sold through the pet trade, smuggled into the country or bread for domestic sale.

“We offered a place for the animals when people realized they were in over their heads, and had to get rid of these animals,” said Doucette.

“The other part of our mission is to educate,” said Oliver. “For years I’ve been in schools, community centres, libraries and so on, teaching people about animals, from insects right up to large animals. I’ve had large cats in the past including tigers, a black jaguar and a cheetah. As a result, I have a deep knowledge and we have a really good reputation with many organizations.”

Last year they did a record year of 585 presentations (obviously more than one a day), many of which were done on a fee basis.

“It’s a major part of our revenue,” said Doucette. “But we do some specific places for free as well. Last Saturday at BC Children’s Hospital, we participated in the ‘Balding for Dollars’ campaign. We do Canuck Place, the Make a Wish Foundation, and in June we’ll be doing the Variety Club’s Boat for Hope. We don’t get any government funding.

“I have so many stories from working with kids that’ll bring tears to your eyes when you see the joy and peace it brings them just to experience some of our creatures,” said Oliver. “That alone makes it all worthwhile.”

They offer a Nature Club for kids aged six to twelve, a Junior Zoo-Keeping course, quite a unique course for ages thirteen to seventeen.

“We have an intensive adult career training course in animal handling and Zookeeping,” said Oliver, “based on the international curricula used by most zoos. We have a summer camp, a full two months of summer camp dates, and this spring we had both a Spring Break camp and a Strike Camp which was full to bursting.”

Asked to describe a tour of the centre, Oliver said, “We’ll start you with a tour of the bug lab and all along the tour we’ll tell you about the animals and the stories that come with them. We’ll also educate you about how they can be dangerous and how they don’t make good pets. Also we talk about the dumping of animals in the environment and how it can result in invasive species getting into the environment and creating a lot of damage to the local species, like the American bullfrogs destroying the local frog populations around the Fraser Valley or pythons released into in the everglades that are killing the alligators.”

Urban Safari Rescue Centre is open every day except Tuesdays. For more information go to www.urbansafari.ca

App to empower your mood