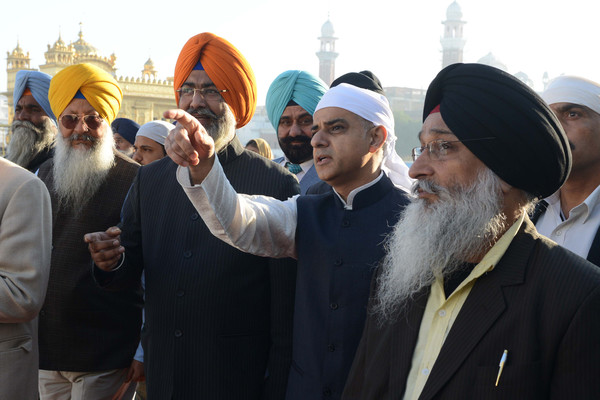 Amritsar: Moved by the tragedy that happened 98 years ago, London Mayor Sadiq Khan said on Wednesday that the British government should apologize for the Jallianwala Bagh massacre in Amritsar which left hundreds of dead.

Khan, on his maiden visit to Amritsar, paid tributes to those who died at the sprawling ground in the city.

“It was incredibly moving to visit Jallianwala Bagh. The tragedy in 1919 on Baisakhi is one we must never forget. It is time for the British government to finally apologize. Our thoughts are with all those who died,” Khan wrote in the visitor’s book after paying floral tributes at the memorial.

Khan went around the Jallianwala Bagh complex and saw the Martyr’s Well and the bullet marks on the walls.

Hundreds of Indians, including women, children and the aged, were shot dead by British troops led by Brigadier General Reginald Dyer on April 13, 1919.

The victims had no place to escape as the only narrow entrance was blocked by the troops. Colonial-era records put the death toll at around 400, while leaders of the country’s freedom movement said over 1,000 were killed.

Though British monarch Queen Elizabeth and her husband Prince Phillip visited the Jallianwala Bagh in October 1997, no apology for the massacre was offered.

Khan, later on Wednesday, visited the Golden Temple complex, where the holiest of Sikh shrines, Harmandir Sahib, is located and offered prayers.

The Shiromani Gurdwara Parbandhak Committee gave Khan a ‘siropa’ (robe of honour) during the visit. He also visited the Langar hall, the largest community kitchen in the world, in the shrine complex and partook ‘langar’ sitting on the floor.

Khan, who was on a three-city tour of India, visiting Mumbai, New Delhi and Amritsar, later crossed over to Pakistan from the Attari-Wagah land border, about 30 km from here.

The London Mayor, of Pakistani-origin, will visit Lahore, Karachi and Islamabad in Pakistan.