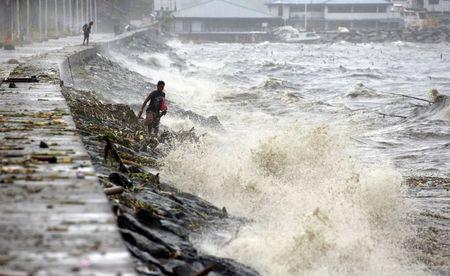 As of 12 p.m., the National Disaster Risk Reduction and Management Council said a total of 283,486 persons were affected in the regions of Ilocos, Cagayan, Central Luzon, Calabarzon, Bicol and Cordillera Administrative Region, with 36 road sections and 18 bridges remaining impassable, Xinhua reported.

Powerful winds and heavy rain caused power disruptions in three cities and 65 municipalities in Luzon. Bad weather also led to the cancellation of 48 flights, with more than 5,000 passengers and 215 rolling cargoes stranded.

Most of communication lines in Luzon have been restored except Casiguran, Aurora, where Koppu made landfall on Sunday morning.

Due to bad weather, classes and government work have been suspended in most of northern Philippines.

The typhoon, moving at a speed of just five kmph, was expected to weaken into a tropical storm and leave the Philippines in the next few days, possibly Tuesday, the Philippine Atmospheric, Geophysical and Astronomical Services Administration said.

Antonio Lustre, the mayor of San Antonio in the Nueva Ecija province, said his town was under water and people were waiting to be rescued from the rooftops of their houses.

The heavily populated region around capital Manila was not in Koppu’s direct path, but it was still getting lashed by winds and rain.

The deadliest storm to hit the country in recent years was super typhoon Haiyan, which left more than 7,000 people dead or missing in November 2013.