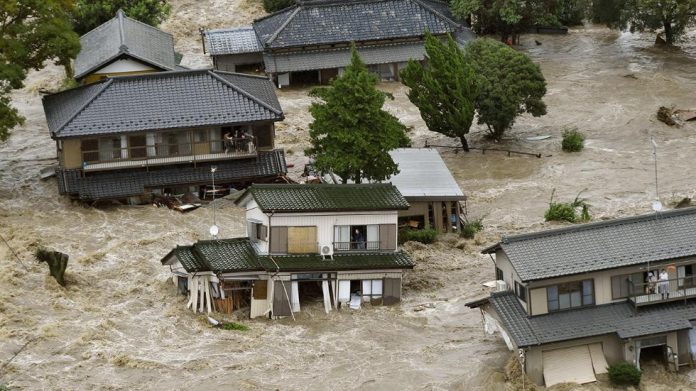 Tokyo, Sep 10 (IANS/EFE) Typhoon Etau on Thursday caused heavy rainfall, severe flooding and the evacuation of nearly 100,00 people in central and eastern Japan, where it also left at least one missing and around a dozen injured, media reported.

In the most affected regions, the amount of rainfall in 24 hours has exceeded double the usual amount for the entire month of September.

Nikko locality and other cities in Tochigi prefecture received more than 500 mm (19.7 inches) in the last 24 hours, the highest in three decades.

Several regions in central Japan received more than 400 mm (15.7 inches) during the same period, leading to the local government of Ibaraki prefecture to seek help from the armed forces in rescue operations for people trapped or carried away by the flood.

Ibaraki authorities have called for the evacuation of around 8,200 people, while another 90,000 residents of Tochigi were asked to evacuate, according to state broadcaster NHK.

Prime Minister Shinzo Abe announced on Thursday that the government will take necessary measures to protect its citizens in light of the disaster, NHK reported.

A 63-year-old woman from Tochigi has gone missing following a landslide at her house, while another 17 have been reportedly injured, two of them in severe condition, in accidents caused by Etau, Kyodo agency reported.

At least 375 houses have also been damaged or destroyed by flood or landslides, according to Japan’s fire department data.

Rain interrupted train services in eastern and north-western Japan, including the Shinkansen (popularly known as bullet train) line between Fukushima and Shinjo stations.

JMA has warned about rain continuing until Friday in the Fukushima, Saitama and Chiba prefectures, as well as the Japanese capital which could witness rainfall of up to 200 mm (7.9 inches).