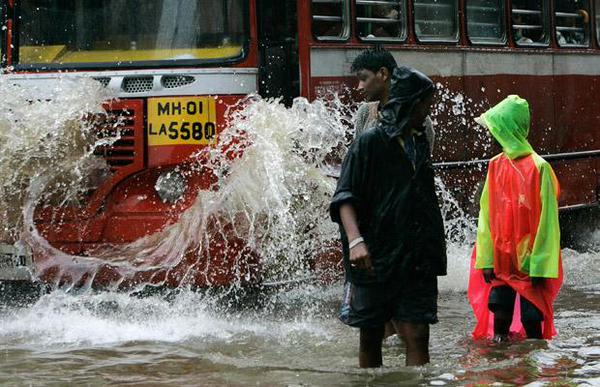 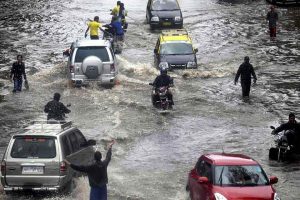 Mumbai, June 19 (IANS) Torrential rains lashed Mumbai and the surrounding areas on Friday, killing two persons, severely affecting road, rail and air traffic and inconveniencing lakhs of daily commuters barely a week after the monsoon set in in the region.

Mumbai city recorded 283 mm rainfall while the suburbs averaged 209 mm in the past 24 hours.

Till Friday evening, the city had recorded another 72 mm rainfall, and 66 mm and 50 mm downpour in the eastern and western suburbs respectively.

More rain is in store for the metropolitan city, coastal Konkan and other parts of Maharashtra over the weekend, accompanied by strong winds and a very rough sea, Mumbai weather bureau director V.K. Rajeev said.

The dead included Ranjit Gupta, 60, and Gaurav Karnik, 5, living in a building in Wadala, who were electrocuted by loose live wires. 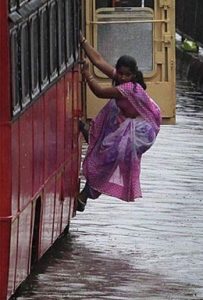 Personnel of the National Disaster Relief Force, Territorial Army, Mumbai Police, fire brigade, home guards and other agencies apart from Indian Navy ships and helicopters were on standby along with boats, life rafts and other equipment to tackle any emergency.

Rain crippled the Mumbai lifeline – the suburban railway network – as rainwater waterlogged the tracks, preventing lakhs from commuting to and from their homes and workplaces.

While Central Railway (CR) and Harbour Line, and Western Railway (WR) started a few services in the early hours, they were delayed and later suspended in the city, rail officials and the Brihanmumbai Municipal Corporation Disaster Cell said.

However, services continued on the mainland beyond Thane, Karjat-Kasara and Panvel sections of CR and beyond Vasai on WR. By late Friday afternoon, the WR resumed skeletal services from Churchgate to Andheri and beyond.

Angry people vented their ire against the civic body and the state government on social networking sites for the “shoddy pre-monsoon cleaning up operations” costing several billion of rupees.

Rainwater entered low-lying homes, especially in slums, tenements and other vulnerable areas in different parts of the city.

Several opposition leaders also criticised the BJP government and the BMC for putting the lives of citizens at risk with tall claims of monsoon preparedness.

Chief Minister Devendra Fadnavis on Friday visited the state and BMC disaster cells to take stock of the situation and discussed precautionary and relief measures with the officials.

BJP ally Shiv Sena president Uddhav Thackeray said it was not proper to blame only the BrihanMumbai Municipal Corporation as there was around 300 mm of rainfall in a single day.

BMC spokesperson Vijay Khabale said the civic body had advised people not to send their children to school and Mumbaikars were asked to venture out only if necessary.

All incoming and outgoing domestic as well as international flights at Chhatrapati Shivaji International Airport suffered delays of a minimum 15-45 minutes, an official spokesperson said.

At least three incoming flights of different airlines from different destinations to Mumbai were diverted to dry stations like Ahmedabad or Baroda, though there were no cancellations of any domestic or international flights.

Around 250 special buses were deployed to ferry commuters stranded in different parts of the city as the suburban train services remained affected for the most part of the working day.

There were reports of uprooting of trees, road cave-ins, submerged vehicles, power failures and traffic snarls on the Western and Eastern Express highways and waterlogging at both ends of several flyovers and the Eastern Freeway.

As a precautionary measure, Reliance Energy switched off five of the 6,200 sub-stations and a 1000-strong field staff was pressed into service to monitor complaints of power disruptions, an official spokesperson said.

17 killed in suicide bombing in Iraq