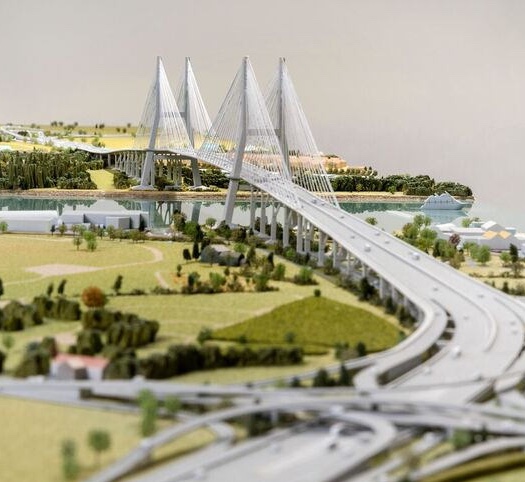 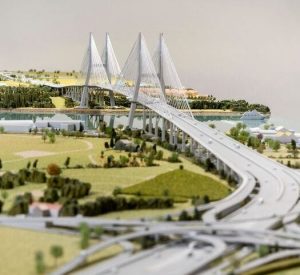 Transportation and Infrastructure Minister Todd Stone, Delta Mayor Lois Jackson and other dignitaries were on hand to officially kick off construction on the George Massey Tunnel Replacement Project.

Due to heavy traffic the start of the event was delayed giving a small group the opportunity to protest the Tunnel replacement project.

Because of the heavy rain and the presence of protesters at Delta Fire Station Number 4 at Ladner Trunk Road and Highway 99, the launch ceremony was conducted inside the fire hall.

“After four years of consultation with First Nations, municipal and regional governments, and a tremendous amount of technical work, construction is underway on the George Massey Tunnel Replacement Project, which includes replacing the seismically vulnerable tunnel with a safe, modern bridge,” said Stone. “These site preparation contracts represent the first work on the Massey replacement, which will generate approximately 9,000 direct jobs over the life of the project.”

“This project will address the needs of our residents, the agricultural community, local business, commerce, and industry, by aiding in the movement of people and goods throughout the Lower Mainland, while also improving the safety and quality of life of our citizens,” said Jackson. “This project is a testament to what can be accomplished when multiple levels of government work together for the benefit of all.

“We’re excited to be a small part of history as our crew begins the work on the George Massey Tunnel Replacement Project,” said Chad Tenney, vice-president of Hall Constructors. “The good jobs created by this project will benefit our employees and their families, and the many others who will work on the project over the next five years.”

A contract valued at $5.8 million has been awarded to B&B Heavy Civil Construction of Surrey for site preparation along Highway 99 between Bridgeport Road and Steveston Highway. The total cost of the George Massey Tunnel Improvement Project is estimated at $3.5 billion.

This site preparation work includes ditch improvements and the placement of pre-load material on soft soils immediately adjacent to the existing highway. Pre-load work is standard practice on most major highway construction projects. Soil is piled to compress the existing ground in advance of the main work, which will minimize settlement following construction.

All major approvals are in place for the project to proceed, including the project’s Environmental Assessment Certificate, awarded on Feb. 9, and approval from the Agricultural Land Commission received on Feb. 24.

“We appreciate the ministry’s responsiveness to input and concerns around agricultural issues relating to the project,” said Richmond Farmers’ Institute president Todd May. “The inclusion of the Richmond Farmers’ Institute during the consultation process has further solidified the relationship between government and farming families in enhancing agricultural viability now and into the future.”

The new bridge and associated highway improvements, including dedicated transit lanes, will cut some commute times in half and also improve travel-time reliability for the 10,000 transit passengers and more than 80,000 vehicles that use the tunnel each day. The project includes over $500 million in transit infrastructure.

After site preparation, major construction will begin later this year with the new bridge opening in 2022. Tunnel decommissioning will follow.