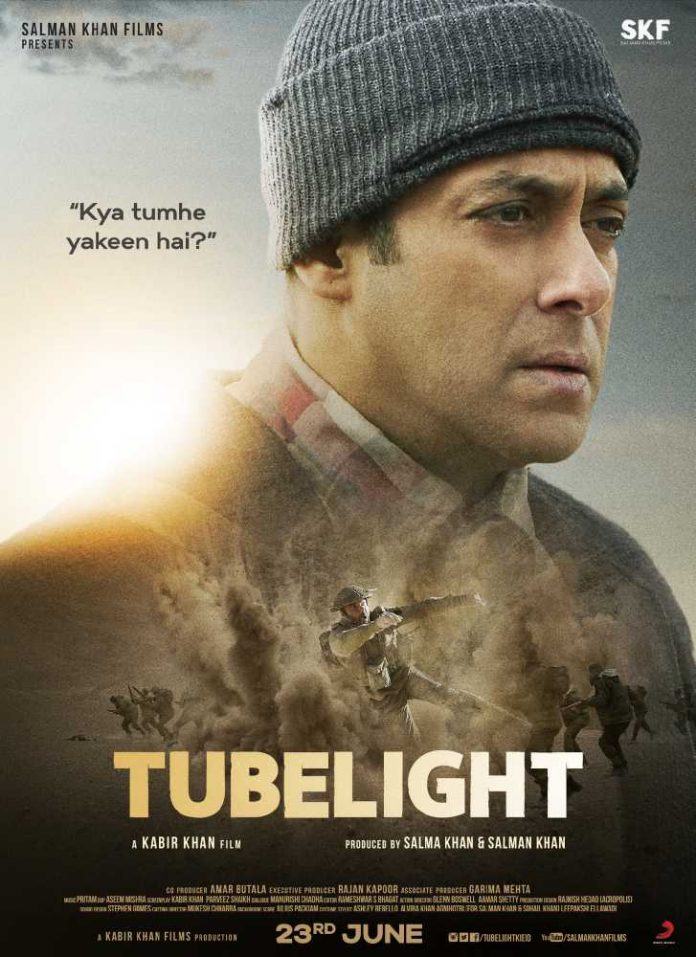 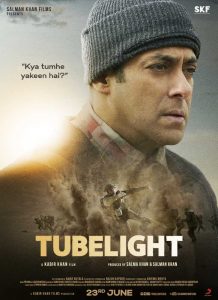 Faith, they say, can move mountains. The hero of Kabir Khan’s latest and his most, “ummm”, noble (if one can use that word without cynicism) film to date actually thinks he can move a mountain by just focusing hard on getting it right.

“Tubelight” is not a film for the cynics. But if you can toss aside your reservations about a world steeped in arcadian innocence and accept humanism rather than hedonism as a way of living, you can actually savour the supple undulating rhythms of Kabir Khan’s storytelling without questioning his right to create a world so far removed from practical stressful concerns while addressing a theme as grim as war and its ravages.

This is a very simple story with a deceptively elementary plotline: two brothers separated by war,and that’s it! A The rest of whatever flows through Kabir’s magical vision of life during times of war and death, is an offshoot of the siblings’ separation. Speaking of magic, Shah Rukh Khan’s cameo appearance as a magician could have been more brightly executed. It is devoid of impact.

That the siblings Laxman and Bharat are played by real-life brothers Salman and Sohail Khan is a master-stroke. Not a single moment between them is fake or exaggerated. And when Bharat takes off to fight the Chinese at the border, I could feel the palpable pain of Laxman’s loneliness. Salman sheds real tears for his brother. His prayers for the soldier’s return are probably audible to the Gods.

Kabir enters Laxman’s uncluttured transparent head-space with no ulterior motives, no secret agenda except to explore the anatomy of unmitigated incorruptibility. Salman embodies Kabir’s vision to perfection. The gawkiness of an incurable do-gooder, the oceanic love of a brother, the unconquerable quench for humanism. Salman slips all of this into his “hero” Laxman’s character with a sly sublimity.

Yes, Salman is a little older than required. And his fans won’t like his whining and vulnerable persona. But the character’s guilelessness remains fearlessly at the forefront, as Kabir Khan’s narration weaves a Forrest Gump like world of lost humanism regained in unexpected bouts of goodness in the world that Laxman inhabits.

Salman doesn’t hold back. He weeps inconsolably for his missing brother, not conscious of the fact that the camera is watching and recording. Incidentally the cinematography by Aseem Mishra’s is top notch, constructing an aching beauty from the mountainsides, cutting through the pain and suffering of bereavement to convey a visual manifestation of the protagonist’s uncorrupted forever-hopeful soul.

“Tubelight” exudes the spirit of a heightened humanism. There is poetry in the way Kabir Khan composes his shots of Salman bonding with his bro and then with his little Chinese friend who is not really Chinese. Human relationships are built with rare care in this fragile film on compassion and faith.

This brings me to little Matin Rey Tangu who plays Laxman’s little friend. Matin’s precocity and wisdom suffuses the frames every time he is around. It is regrettable that his role loses its momentum as the plot progresses. In fact the film has a serious pacing problem. For this lack of cohesion in the construction of Kabir’s fragile film, editor Rameshwar Bhagat must take responsibility.

That apart, “Tubelight” is a work that effortlessly overcomes its hurdles of flimsy drama. It is a film with a deep insight into an uncorrupted soul. I wonder if anyone but Salman could sob so uncontrollably for his missing brother. And if some critics see Salman’s performance and the film as manipulatively emotional then that, my friend, is a sad comment on how cynical we’ve become about the value of sheer goodness in today’s trying times.

Ignore the cynical readings of this enchanting excursion into an anti-war film. Just go and watch Salman embracing Gandhism with heartbreaking earnestness. This is filmmaking at the opposite end of what Ram Gopal Varma makes.