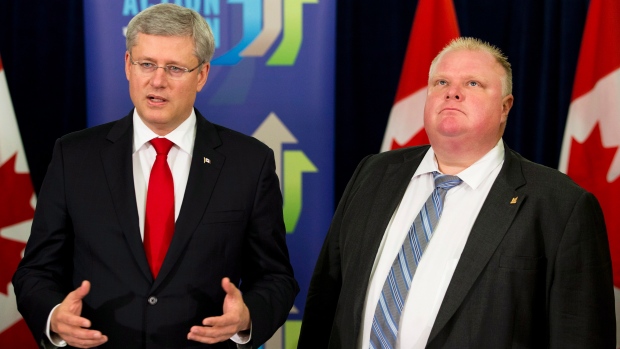 Ford, who has said he wants to run for mayor in 2018, was front and centre of Harper at a rally earlier in the week and, along with his brother, plans to co-host a final election pro-Harper campaign bash on Saturday.

“Stephen Harper should be embarrassed that he’s having to count on the support of Rob Ford for his re-election,” Trudeau said in Montreal Thursday.

“What bothers me most is the misogyny: The Ford brothers should have no place on a national campaign stage, much less hosting a prime minister at an event this weekend.”

Harper, who has expressed strident anti-drug views including that marijuana is “infinitely worse” than tobacco, has simply said the Fords have been long time Conservative supporters and said he welcomes their support.

The account of the ruckus between Ford and his wife Renata comes in the form of an excerpt from a new book written by the ex-mayor’s former chief of staff Mark Towhey.

Ford, now a city councillor who appears to have cleaned up his act, refused to weigh in on Thursday.

“I don’t comment on what people write or have written about me, and I wish them all the best,” Ford told The Canadian Press.

The excerpt, published in Maclean’s magazine, paints an ugly picture of an out-of-control man who, at the time, was yet to garner international infamy for his obscene drug and alcohol-fuelled rants and a video that showed him smoking what appeared to be crack cocaine.

Ford, a father of two young children, and his brother Doug, however, would spend much of the following year in the throes of outward denial, castigating the media for spreading lies about his substance abuse and claiming he had never smoked crack.

The published excerpt is Towhey’s account of a phone call he received early one morning in June 2012. On the other end, the book says, was a raging, agitated mayor who told Towhey he had been having an argument with his wife, whose speech is slurred and who can be heard by turns screaming and pleading with her husband.

“Rob sounds like he’s out of control,” Towhey writes in the book, “Mayor Rob Ford: Uncontrollable: How I Tried to Help the World’s Most Notorious Mayor.”

“Both of them spit a string of curses at one another. I can’t hear it all, but it doesn’t sound good.”

Some of the language both the mayor and his wife use was deemed inappropriate for Maclean’s, which would not reprint it.

For an hour and 40 minutes as he listens and tries to calm Ford down, according to the excerpt, Towhey agonizes over whether to dial 911 and have police intervene.

“I swear to God I’m going to kill this woman, brother,” Towhey reports Ford as saying at one point. “She just took my gun upstairs.”

At another point, it says their daughter Stephanie is woken by the commotion and Ford sends her back to bed.

Renata Ford remained largely invisible throughout Ford’s scandal-plagued tenure, appearing once by his side in November 2013 when he apologized for an earlier rant in which he alluded to their marital sex life. She could not immediately be reached.

Towhey referred requests for an interview to his publisher, who said there would be no immediate comment.

The book is set for publication Nov. 10.