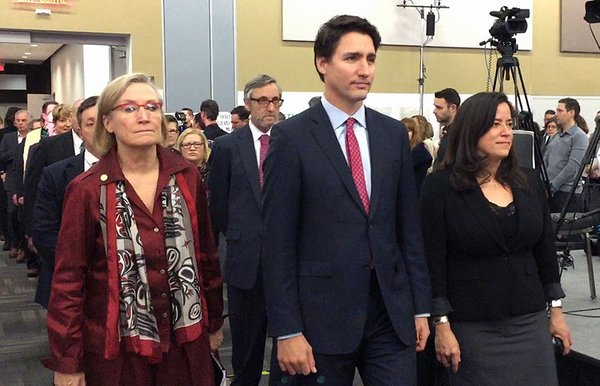 OTTAWA: Prime Minister Justin Trudeau confesses he can’t compel an apology from the Pope for the role of the Catholic Church in Canada’s residential school system.

But Trudeau, unlike his predecessor in office, says he looks forward to raising the matter with the pontiff.

Trudeau met for more than two hours Wednesday morning with leaders from five indigenous organizations, capping a week that saw the Truth and Reconciliation Commission deliver its final report on the legacy of residential schools.

The commission made 94 “calls to action” towards reconciliation in a preliminary report last June, including an apology from the Pope, and the Liberals pledged to implement the entire report.

That’s a sharp U-turn from the Conservative government of Stephen Harper, which declined to respond to last June’s preliminary findings while it awaited the unabridged version.

The Conservatives never got the chance, losing office in October’s general election. But Harper did pass on an opportunity, just a week after the June release, to broach the subject with Pope Francis during a 10-minute audience at the Vatican in Rome.

Trudeau didn’t express any reservations when asked about the papal apology Wednesday. But he did lower expectations.

“I’m not going to pretend that it is my job to order other governments or other organizations to do anything,” he said in the House of Commons foyer, flanked by the five indigenous leaders.

“But I certainly look forward to a constructive engagement where we can address this issue because, quite frankly, there are multiple levels of different organizations that have a role to recognize in this terrible part of Canada’s past. I look forward to having a conversation with His Holiness about this.”

About 60 per cent of Canada’s residential schools were run by the Catholic Church between the 1840s and 1996, when the last school closed.

The six-year TRC inquiry found that the government-funded, church-run schools were the key to a policy of cultural genocide designed to “kill the Indian in the child” _ something for which the head of the Catholic Church has not formally apologized.

Perry Bellegarde, the national chief of the Assembly of First Nations, said Wednesday’s meeting served as a chance to praise Trudeau and his cabinet for opening a new inquiry into missing and murdered indigenous women, including the government’s move to involve the families at the front end of setting the inquiry’s terms of reference. The government also won plaudits for its acceptance of the TRC recommendations.

“’Reconcili-Action’ is the new word that everybody’s talking about,” said Bellegarde.

And he said the AFN while continue to push for atonement from the head of the Roman Catholic Church.

“Because really, the Catholic Church is the only church that has not formally apologized to the survivors,” of residential schools, said Bellegarde.

He also took aim at the church’s 1493 Papal Bull, with its “doctrine of discovery” which gave Christian explorers the right to claim any lands they found that weren’t inhabited by Christians. It’s long past time to formally revoke it, says Bellegarde.

“It’s being viewed now internationally as an illegal and racist doctrine,” he said.

The grievance gives a taste of the long history that Trudeau aspires to overcome as he seeks to reset the Crown’s relationship with Canada’s indigenous people.

But the prime minister appears to be off on the right foot.

“This was a breath of fresh air today,” Dwight Dorey, national chief of the Congress of Aboriginal Peoples, said following Wednesday’s meeting.

Dawn Lavell-Harvard, the president of the Native Women’s Association of Canada, acknowledged that expectations for the current government’s ability to reset the relationship are stratospheric, but she urged them to go for it.

“Shoot for the moon,” she told reporters.

“Everybody expects great things after 10 years of darkness, of being ignored, of deflection. People are coming into this with very, very, very high hopes.”

PM announces changes to the Ministry