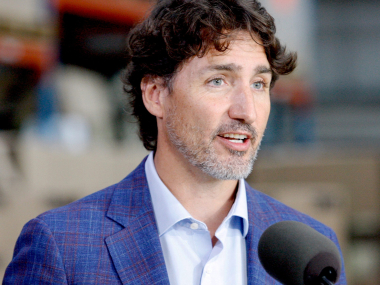 Vancouver: Prime Minister Justin Trudeau says Ottawa is moving forward “aggressively’’ on ensuring a safe drug supply amid an ongoing overdose crisis that’s claimed more than 900 lives in B.C. alone this year.
Speaking on CBC Radio in Vancouver, he said Wednesday that his government is basing its approach on science and evidence, looking at the crisis through the lens of health rather than justice.
Trudeau said the government is heeding the advice of top public health officials, including B.C.’s provincial health officer, Dr. Bonnie Henry, and Canada’s chief public health officer, Dr. Theresa Tam.
Both doctors have called for increased access to a safe supply of illicit drugs to prevent deaths from toxic substances and extreme concentrations of powerful opioids, such as fentanyl.
Henry continues to call for the decriminalization of small amounts of drugs for personal use, and last month, Tam made the same suggestion.
Pressed on whether his government would consider that move, Trudeau said a safe supply is the key “and that is what we’ve moved forward on without having to take the step to decriminalization.’’
He said significant investments are still needed on housing, mental health and other support services for people battling addictions and homelessness.
“We know there’s more to do, but we are going to do it responsibly and make sure that we are prioritizing the things that are going to make the biggest difference immediately,’’ he added.
Trudeau said his government has moved forward on supporting safe consumption sites and safe supply options despite pushback from political rivals.
Last week, Health Minister Patty Hajdu sent a letter to her provincial and territorial counterparts and regulatory colleges encouraging them to act, including increasing access to safer, pharmaceutical-grade alternatives to the contaminated illegal drug supply.
Judy Darcy, B.C.’s minister of mental health and addictions, said Wednesday the province will continue to press the federal government on decriminalization as they work together on increasing the safe supply.
Darcy said pilot projects that pair patrol officers in places like Abbotsford with peer support workers are showing good results.
“Instead of criminalizing people with small amounts of drugs for personal use, they are connecting them with health supports, with mental health and addiction supports,’’ she said at an announcement on mental health programs for schools.
“We believe that is the way to go.’’
Much of Trudeau’s schedule on Wednesday involved meetings with political, business, environmental and academic leaders in B.C. He will do a similar virtual tour of the Atlantic provinces on Thursday.
The summer is usually an opportunity for the prime minister and other federal political leaders to travel widely, but the need to curb the spread of COVID-19 has cut much of that travel this year.
Apart from the occasional trip to Toronto, Montreal and communities near Ottawa, Trudeau has stayed home and found other ways to conduct regional outreach.
The Liberal government is due to present a throne speech on Sept. 23, detailing what Trudeau has promised will be a bold plan for economic recovery. Trudeau’s virtual tours of B.C. and the Atlantic provinces are at least in part devoted to consultations on that plan.
Trudeau also scheduled a meeting with B.C. Premier John Horgan and held a roundtable with the province’s business and environmental leaders on a sustainable economic recovery.

By Nick Wells
The Canadian Press