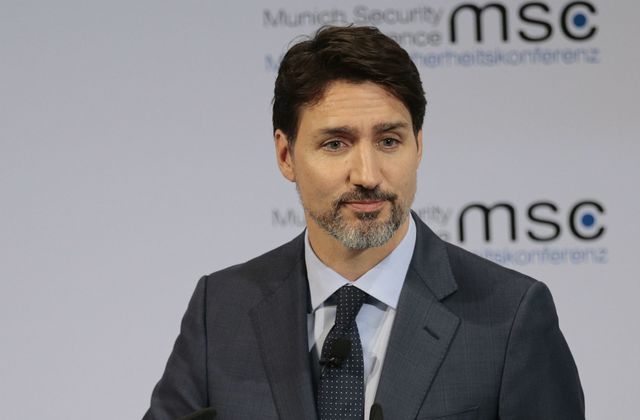 “I look forward to working with President-elect Biden, Vice President-elect Harris, their administration, and the United States Congress as we tackle the world’s greatest challenges together,” said Trudeau.

Trudeau lauded the “extraordinary relationship — one that is unique on the world stage” between the two countries.

“We will further build on this foundation as we continue to keep our people safe and healthy from the impacts of the global COVID-19 pandemic, and work to advance peace and inclusion, economic prosperity, and climate action around the world.”

Trudeau followed up on Twitter offering Biden and Harris a more personal message: “I’m really looking forward to working together and building on that with you both.”

Trudeau made no mention of Trump.

“Your victory is an inspiration to women & girls and to people of colour across our continent. I look forward to working w/ you to help both our countries crush this global pandemic & to crack more glass ceilings along the way.”

A Biden presidency will mean an end to nearly four years of Canada’s government having to walk on eggshells to navigate around an unpredictable U.S. president who posed a primordial threat to the Canadian economy even before he took control of the Oval Office on Jan. 20, 2017.

Trump repeatedly threatened to rip up the North American Free Trade Agreement before and after becoming president and Canada, along with Mexico, managed to negotiate a replacement deal that went into effect this past summer.

But not before Trump insulted Canadian farmers, Trudeau himself, and the country’s Second World War legacy by imposing punitive steel and aluminum tariffs using a section of U.S. trade law that deemed the country a national-security threat.

Trudeau and his cabinet took that personally, and the prime minister felt Trump’s wrath directly in June 2018 when the president called him “very dishonest and weak.” Trump tweeted the remarks after watching Trudeau’s final press conference after he had left the G7 leaders’ summit in Charlevoix, Que.

“From my perspective, I can say that now, it was fundamentally unfair,” said Sen. Peter Boehm, who was at Trudeau’s side during his talks with Trump and other leaders at two G7 summits, including Charlevoix, as his senior adviser, or “Sherpa.”

Boehm said Trudeau and his team will have to work with Biden’s transition team to ensure “we’re doing everything possible to ensure smoothness.”

Bruce Heyman, Barack Obama’s last ambassador to Canada, said a Biden presidency will give Trudeau an “honest, trustworthy, and a good partner to sit across the table from.”

Heyman said the U.S. and Canada will continue to have disagreements but no longer will Canada face a president who says: “I’m going to squeeze you ? I’m going to tariff your autos. I’m going to cut off your N95 masks and I’m going to tear up your steel and aluminum, if you don’t give me x, y and z.”

One bone of contention could be the fate of the Keystone XL pipeline, which carries Alberta oilsands crude across the U.S. to the Gulf of Mexico. Many observers, including George W. Bush’s former envoy to Canada, David Wilkins, have said Biden will rescind the pipeline’s permit, which would hurt Alberta’s economy.

Kenney offered congratulations to Biden, reminding him of the strong economic, immigration and social ties between his province and the U.S. _ and of the importance to Alberta energy to the Americans.

“Much of the American economy is fuelled by Alberta energy. We look forward to working with President-elect Biden’s transition team and future administration to ensure that this vital economic partnership continues,” Kenney said.

“Canada and the United States must work closely together to protect lives and livelihoods through the COVID crisis, and to return our economies to growth.”

The Quebec and British Columbia governments, along with the federal New Democrats and the Green Party, expressed excitement that a Biden administration would become a stronger partner on the environment than Canada has seen in the last four years.

“I will work with the new administration to make our relationship more prosperous and to become the green battery of Northeast America,” Quebec Premier Francois Legault tweeted.

“The United States is a close friend and partner of B.C., and we have taken important steps together with our neighbours to fight climate change, grow the innovation economy and build a more sustainable future,” said B.C. Premier John Horgan.

NDP Leader Jagmeet Singh said the Biden-Harris win instils “hope that Canada can count on the United States to fight the climate crisis and COVID-19.”

Green Party Leader Annamie Paul offered her congratulations in a statement, saying she hoped the two countries could work together on enhancing the fight against climate change.

“In particular, I want to pay tribute to Kamala as she becomes the highest-ranking woman in the history of the United States,” said Paul.

Heyman said a Biden administration would regard Canada as a key partner in “tackling some of the most significant issues to face our planet and humanity,” including “a pandemic and global climate change and economic shifts.”