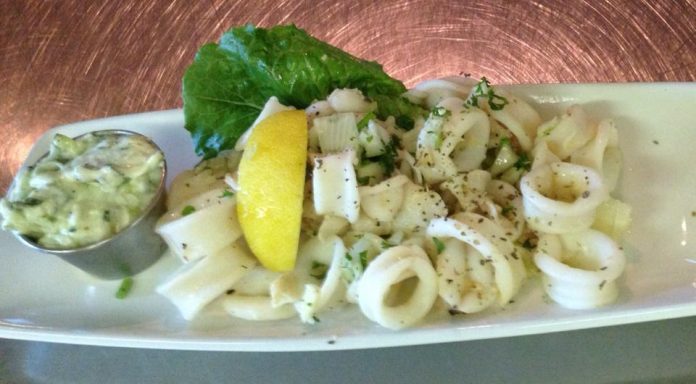 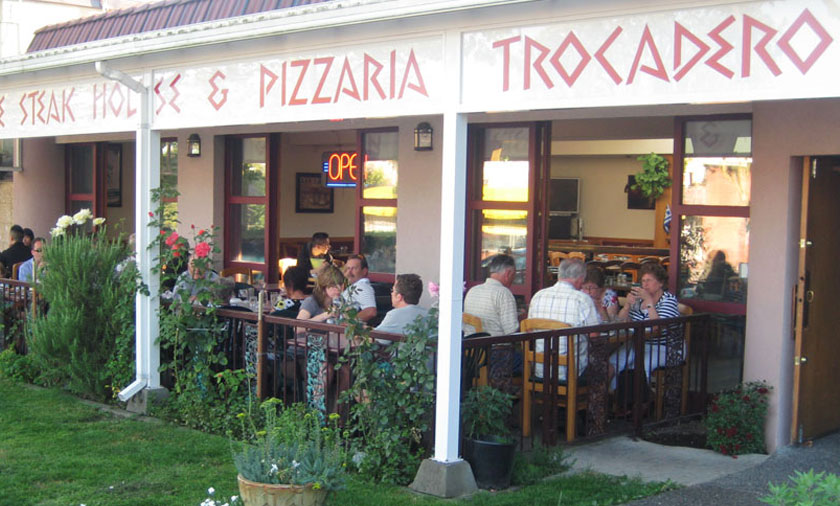 the attention of many people. The small takeout restaurant was sold in 1971 to Bill and Kyriakos. The two brothers took over the place with a great reputation for delivery and take-out, but that was just the beginning. The two brothers took over the space located beside the restaurant and expanded their business. Some of you might still remember the old place, red booths, brick archways, red carpet, wonderful oil paintings of bullfighters and beautiful women.
The two brothers sold the business in 1974 and opened two more Trocadero’s, one on Kingsway and one on Canada way. The brothers eventually moved on to their own ways with Kyriakos moving back to Greece and Bill eventually taking over the famous Simpatico Restaurant on the west side. In 1994, the two brothers took over Trocadero Restaurant once again and just 6 months later they started a major renovation on the place that changed the level and expectations for eastside restaurants.
We ordered what would be our usual, as we hadn’t had that in a while. The hummus was the biggest surprise and probably the best we’ve had, Ultra creamy with a strong, penetrating roasted garlic flavor that doesn’t sting the tongue. The saganaki was fairly typical though some would balk as it does have a bland taste and texture akin to tofu. My friend’s roast lamb was marvelously done, with a strong lemon and mustard flavor, perfectly seasoned and the familiar juicy, fork tender meat.

The only qualm would be that I found the meat to be on the leaner side, though a personal preference. My friend split the calamari entree. Lightly battered with the coating actually sticking to each piece it was tender and just right. What nearly stole the spotlight however the roasted potatoes and the tzatziki side with lemon flavor penetrated almost into the center of the potatoes while the tzatziki was a bit of a twist, it used shredded cucumber and had a fantastic whipped consistency. I am not a tzatziki fan and I ended up using all of it. We were hoping to finish our meals off with some baklava but alas they had run out and wouldn’t be making it until the next day – good to know!
While the place was quiet for the most part, the service was friendly and on the ball, yet without the burden of constant checkups because it wasn’t busy. I really liked how our server eyed the tables and made sure appetizers were finished before they brought out the entrees since it’s normally a pile up at the table.
We even got a bunch of goodbyes from the kitchen as we left. Sure the decor isn’t going to win any awards (but it’s not bad, just comfortable), but hey, you go there for the wonderful food (or maybe you get the great pizza or Greek food delivered when you feel lazy to cook). This is a family restaurant and the nice thing is they’re really accommodating…so you could bring your kids and have a family meal or you could have an awesome large party celebration and they can easily arrange a reservation for 30 people.
Located at 2411 Nanaimo Street in Vancouver, open for lunch and dinner; give them a call at 604-253-8714. This is a neighborhood Greek Pizza and steak house restaurant, price range anywhere from $15 to $30.

If you would like us to come and visit your restaurant and write a review, give us a call 604-597-7749 or email me at news@swmediagroup.ca. and kamillasingh@gmail.com

How you can market your business effectively using SEO for the...