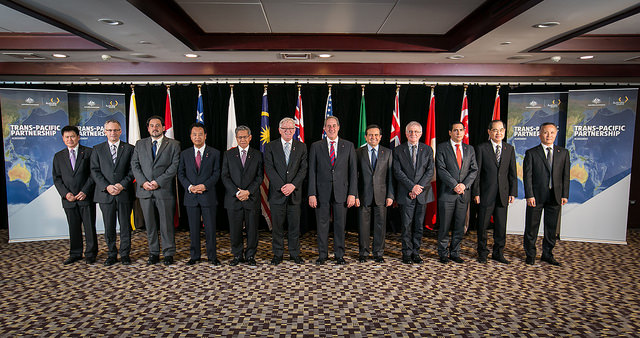 Surrey: The Trans Pacific Partnership, described as the largest, most ambitious free trade deal has successfully concluded negotiations. Harper government Trade Minister, Ed Fast, incumbent Conservative candidate for Abbotsford, took time away to participate in the final stages of the negotiations, reporting that the deal is a comprehensive, economic, strategic and balanced agreement that will increase Canada’s foothold in the Asia-Pacific. This region is expected to comprise two-thirds of the world’s middle class by 2030, and one-half of global gross domestic product by 2050.

Sukh Dhaliwal, said that when he was a Liberal MP, he had experience negotiating trade deals, saying that both, he personally, and his party supported the trade deal.

“We signed a free trade agreement with Colombia,” said Dhaliwal, “and we went through quite an extensive process at that time. When we signed a deal, it was an open, transparent process, because that was one of the processes when the conservatives took over. We wanted to make sure our businesses were secure and we made sure that the environmental sensitivity was met so they could deliver a protected environment.”

“When it comes to the TPP now, the Liberal Party and myself are always supportive of any free trade,” said the Liberal Candidate. “We have to open our businesses to markets and let our businesses go. But our problem is with the way the TPP was signed. Mr. Harper has not been open and transparent where he is going to concede things, and how he’s going to protect our businesses.”

Dhaliwal was asked how Canada could be expected to negotiate in this multi-national milieu, where negotiators have to play their cards pretty close to the chest while remaining open to the Canadian public?

“I think the problem is that Mr. Harper did not keep the other parties informed on what was going on,” said Dhaliwal. “He could have had an all-party committee and held the members in confidence, where they could still see that Canadian business and manufacturing interests are being protected. People are worried about our dairy products and the dumping of dairy products from other countries. The whole agriculture sector is concerned as well.”

“When it comes to Surrey and Surrey Newton,” said Dhaliwal, “it’s a very important deal. We are a global city now and the manufacturing sector here is not sleeping, we have to open doors for them to grow. That is where these free trade agreements will fall in place.”

The Delta Riding plays a huge role in Pacific Rim trading, being the home of Delta Port and Surrey, the Fraser Surrey Docks. The Conservative Candidate for Delta, Kerry Lynne Findlay, did not respond to the request for comment concerning the TPP impact on Delta.

“We got a good deal,” Conservative Leader Stephen Harper said. “The historic deal protects Canadian jobs today and creates more for generations to come as it secures access to hundreds of millions of new customers in the Asia-Pacific region. This deal is, without any doubt whatsoever, in the best interests of the Canadian economy,” Harper told a news conference Monday after the deal was announced.