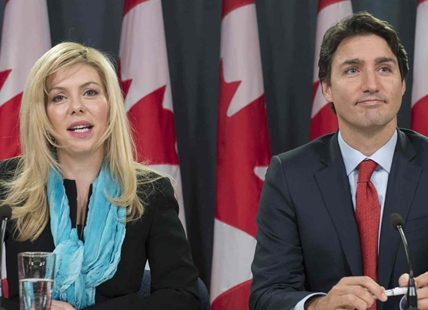 Ottawa: Justin Trudeau’s Liberals scored a two-fer. Well-connected Toronto-area Conservative MP Eve Adams crossed the floor to sit with the Liberals.
And her surprise defection had the full support of her fiance, former top Conservative operative Dimitri Soudas, long considered one of Stephen Harper’s fiercest loyalists and an architect of the Tories’ re-election strategy for 2015.
Within hours, Soudas made it clear he’s prepared to use his inside knowledge of the Conservatives against them.
“Mike, stand down on throwing stones from glass houses,” he tweeted in response to what he considered a jab at Adams from Edmonton Tory MP Mike Lake.
“What did you ask me to do again?”
Conservatives cast Adams’ decision as pure opportunism by a woman spurned by the governing party. Party president John Walsh said Adams asked “just a couple weeks ago” about running in another riding, after the party barred her last summer from running in Oakville North-Burlington.
“I informed her in writing on Jan. 29 that she would not be permitted to run for our party in the next election due to the misconduct from the Oakville North-Burlington nomination race,” Walsh said in a statement.
Prime Minister Stephen Harper echoed those comments later Monday at an Ottawa news conference with German Chancellor Angela Merkel.
“The national council of our party is responsible for an honest, clean nomination process. It informed MP Adams some 10 days ago that she could not be a candidate for the party for reasons that I think everybody understands,” Harper said.
“That’s obviously the reality of the situation and that’s the sole reason we obviously have the development we have today.”
But Adams and Trudeau cast her move as a matter of principle.
“This is not about having a tough day at the office; everybody has grumpy bosses from time to time,” Adams said.
“This is about the fact that my values simply don’t align with this (Conservative) team and I’d like to continue serving Canadians.”
Whatever the Conservatives may say about Adams now, Trudeau noted that she continued to serve as a parliamentary secretary to the health minister right up until she resigned Monday. Parliamentary secretaries are appointed by the prime minister and are one rung down from cabinet.
Adams took some harsh parting shots at the party she has championed since she was 14 and at Harper as she blasted the Tories’ recently-introduced income-splitting tax measures for families.
“I cannot support mean-spirited measures that benefit only the richest few,” she said.
“I can no longer support mean-spirited leadership that divides people instead of bringing them together. We need a kind, generous and strong leadership that champions a shared vision for how to make Canada work for everyone. I want to work with someone who inspires, not with fear mongerers and bullies.”
However, NDP Leader Tom Mulcair accused Trudeau of “stoking cynicism” about politics by welcoming an MP who, until Monday, had supported “every single decision,” including income splitting, taken by Harper for the past nine years.
Adams was first elected for the Conservatives in 2011 in the Toronto-area riding of Mississauga-Brampton South but had hoped to run again for the Tories in the newly-created riding of Oakville North-Burlington.
A bitter nomination contest ensued and both she and her opponent were forced to drop out. Among other things, the contest involved allegations that Soudas, at the time the executive director of the Conservative Party, was using his position to unfairly help Adams.
Soudas, who formerly served as the prime minister’s communications director, subsequently lost his party job, to which he’d been personally appointed by Harper.
Adams said her family supports her decision but declined to specifically address questions about Soudas, suggesting such questions were sexist.
Trudeau said only that he welcomes any family, friends or supporters that Adams brings with her.
But Soudas later confirmed, through Twitter, that he is indeed on side with Adams’ switch.
“Fully support bMPEveAdams’s decision. She is smart, hard working & caring,” he tweeted.
Adams said she’ll run for a Liberal nomination in a Toronto-area riding but declined to identify the riding. She’ll sit with the Liberal caucus for now.
Liberal insiders say it has been made clear to Adams that candidates are responsible for the conduct of their campaign teams and any misconduct could be grounds for being barred from running.
Trudeau said he discussed the possibility of a hypothetical Tory floor crosser with his caucus last week, without identifying Adams.
“The caucus knows that we have to grow in order to be competitive and this is what it’s all about,” he said.
© 2015 The Canadian Press