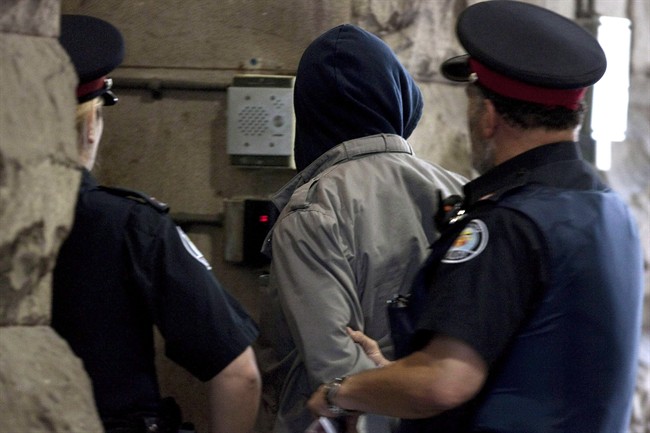 By Diana Mehta, The Canadian Press

Toronto: A man accused in a shooting at Toronto’s Eaton Centre was found guilty Wednesday of second-degree murder in the deaths of two men who were killed at the popular downtown mall two years ago.

Christopher Husbands was also found guilty of five counts of aggravated assault and one count of criminal negligence causing bodily harm. The second-degree murder convictions carry a sentence of life in prison with no chance of parole for 10 to 25 years.

Husbands had admitted to fatally shooting Nixon Nirmalendran and Ahmed Hassan and wounding five others in June 2012, but had pleaded not guilty to all charges against him.

His defence lawyers had argued that the 25-year-old should be found not criminally responsible by reason of a mental disorder.

They had said the post-traumatic stress disorder Husbands developed after a vicious beating and stabbing months before the mall shooting triggered an intense emotional reaction when he saw two of his assailants in the Eaton Centre food court.

Husbands went into a “robotic” state as he fired off 14 shots, they argued, and saw only dark shadows and heard only “pins dropping” as pandemonium erupted around him.

The Crown, meanwhile, had argued that Husbands opened fire at the mall because he was determined to get revenge on the men who had attacked him months earlier.

Husbands’s PTSD was “far from disabling,” they had countered, and he was in full control of his mental faculties during the shooting, as was demonstrated by video surveillance footage played at the trial.

The judge presiding over the case had instructed jurors to weigh all the evidence before them, including Husbands’s testimony, the opinions of psychiatrists called by the defence and the Crown, and the video footage from the mall, which he called “the best witness” in the case.

Husbands _ who was also found guilty of discharge of firearm _ stood in the prisoner’s box with his hands clasped and was seen shaking his head after the 12-member jury delivered their unanimous verdict.

A critical issue at the trial was Husbands’s state of mind at the time of the mall shooting, but his defence lawyers’ argument that Husbands was not criminally responsible for the incident was one which caught the Crown off-guard mid-trial.

When it became clear that Husbands’s lawyers were going down that route following a psychiatrist’s evaluation of Husbands, Crown prosecutors had to rush to find their own psychiatrist to assess Husbands in a very short period of time _ a scramble that took place unbeknownst to the jurors.

Mental health experts on both the defence and Crown sides testified that Husbands had PTSD, but the extent to which it rendered him incapable of appreciating his actions at the mall was in dispute.

The trial head that Husbands, who immigrated to Canada at age 11 after being born in Guyana, fell into drug dealing in a rough Toronto neighbourhood and was in and out of school.

Jurors heard that a turning point in his life was the February 2012 attack on him, in which Nirmalendran, a childhood friend, was one of the assailants.

Husbands told his trial he was going to deliver some drugs to Nirmalendran but was set upon as soon as he entered an apartment. He testified he was punched, his legs were taped, a gun was held to his head and he was severely beaten and stabbed.

The trial heard that Husbands managed to eventually make it out of that apartment and collapsed in a pool of blood on a street, where he was found by a passerby.

That attack left him paranoid and fearful, led to flashbacks and a fear of crowds, Husbands testified, and he believed his assailants were out to kill him.

On the day he went to the Eaton Centre in June 2012, the trial heard that Husbands was walking around with a fully loaded gun _ given to him by a friend a day earlier to look after, he said. He testified the firearm made him feel safer because he knew the men who had attacked him carried guns.

Central to the trial was what happened in the minutes before the shooting at the mall.

Husbands testified that as he was standing in the mall’s food court when he heard Nirmalendran say “shoot him” and saw another man reach for his pocket.

He said he did not remember exactly what happened next as he panicked at the sight of his assailants.

Jurors were cautioned by the judge that they had to determine whether Husbands’s statements about what he heard and saw at the food court were true, and if his testimony wasn’t believed, there was “no evidential basis to find that he experienced a disassociative state.”

Video surveillance footage shows Husbands opening fire, holding a gun with both hands, and pumping several shots into a man lying on the ground.