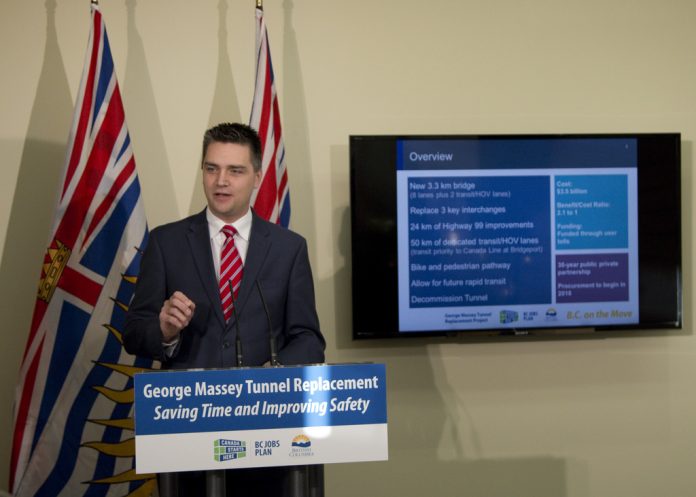 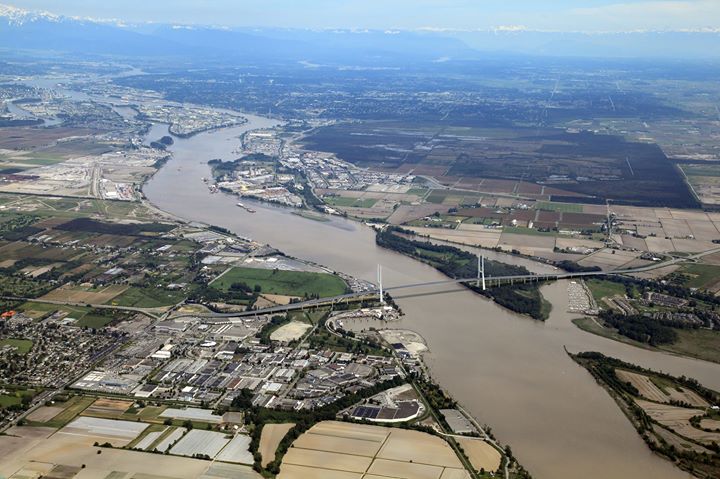 By Tamsyn Burgmann, THE CANADIAN PRESS

RICHMOND: User-pay tolls will be implemented to fund the replacement of the George Massey Tunnel with what will be British Columbia’s largest bridge in history, Transportation Minister Todd Stone said on Wednesday.

Stone has unveiled plans for the new 10-lane span to be constructed in the same alignment as the nearly 60-year-old tunnel under the Fraser River that connects Richmond and Delta.

“That tunnel unleashed a dramatic amount of economic development and entire communities developed as a result,” Stone told reporters at an announcement in Richmond.

“We expect that the same thing is going to happen with this new bridge, in recognizing a million more people are coming in the next 20 years. They’ve got to live somewhere.”

But Stone said government hasn’t yet computed the toll rate for the 3.3-kilometre project, only that he expects the rate to be comparable to the toll on the Port Mann Bridge. Cars on the Highway 1 route between Coquitlam and Surrey pay $3.15 per crossing, while motorhomes pay $6.30 and commercial trucks pay $9.45.

Stone said the province has asked the federal government for a funding contribution by explaining the bridge is the province’s “No. 1 infrastructure priority.” The province has also asked Port Metro Vancouver for money, since the route is used to move commercial goods to nearby ports.

Any funding commitments from those sources would either go to reducing driver tolls or cutting the debt-repayment period, he said.

The bridge was first announced in September 2012 with officials acknowledging the current tunnel had become B.C.‘s biggest traffic bottleneck. The tunnel has about 10 years left before expensive upgrades will be required and it doesn’t meet modern earthquake standards, Stone said.

The benefits of the building the bridge include reducing commuting times and the potential for creating 9,000 direct jobs and 8,000 indirect jobs, Stone said.

The province also estimates the bridge will reduce greenhouse gas emissions by chopping up to one million hours of vehicle idling time per year.

Construction on the bridge along Highway 99 is scheduled to begin in 2017 and last about five years. It will include dedicated transit and HOV lanes, as well as pathways for pedestrians and cyclists who previously had to use a shuttle.

“We have waited in Delta a long, long time for an announcement to alleviate the problems of our commuters and our economy in terms of the truck traffic moving through that area,” said Delta Mayor Lois Jackson during the news conference.

Vancouver Board of Trade chairman Tim Manning said the route is one of the province’s most critical transportation corridors, noting it connects the Metro Vancouver region to the U.S. highway system, the Tsawwassen ferry terminal, Port Metro Vancouver’s Deltaport container terminal and Vancouver’s airport.

“The congestion caused by the existing tunnel and adjacent interchanges severely slows goods movement, which in turn, slows our economy,” Manning said in a release.