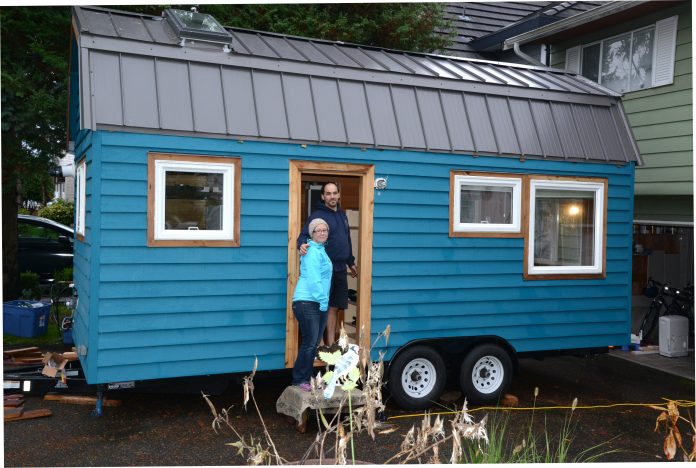 Last week we reported on the rise of the Tiny Home as an answer to out of control housing prices, and a growing popular way to reduce the size of one’s footprint in the environment. But like any rapidly growing phenomenon, the rules and regulations around governance and where and how Tiny Homes may be placed, have not only to catch up, but show up on municipal radar. In part two, we talk with Laura Hudson about these issues.

Asian Journal: Most of the municipalities in the lower mainland are supportive of densification, and in many communities across the Lower Mainland you see the development of laneway houses. But it’s still early days trying to find a niche for Tiny Homes, often on wheels and under 400 square feet. What needs to be done so this housing option is better accepted.

Laura Hudson: I think it’s going to be a while before they’re widely accepted. We have already spoken to one city planning department in the lower mainland (whom they didn’t want to name), and they don’t know what to do with these things. I think one of the biggest issues with them is that the homes have wheels and they’re movable. The incentive to provide permits for secondary structures is so they can be regulated and, of course, taxed. Neither of these are easy to do with tiny houses on wheels. Then there’s the problem of general acceptance of tiny houses by the general population. I think they strike people as novel, innovative and clever but if I park my tiny house next door to somebody who doesn’t know anything about them, they may simply see them as trailers that probably belong in trailer parks, and they’re likely to complain to the by-law department if they see anyone living in them. The planning department that I spoke with thought the Tiny Home was a novel and interesting idea, but agreed that it’s a bylaw nightmare. Because they’re new and there’s no law developed around them, they have to be governed by whatever bylaws do exist. I think it’s a major reason holding back more people from embracing them so easily right away.

Asian Journal: Living in an RV or travel trailer isn’t new, so what do you see as the problem here?

Laura Hudson: I think the fact that they look like tiny houses rather than vehicles, really challenges people. Something my partner and I have learned through this process, is that there are a lot of people all over the Lower Mainland, who’ve been living in RV’s and travel trailers, off the grid so to speak, for eons. There are a lot of people living in people’s back yards and on their own properties doing this. People seem more inclined to embrace the idea of having an RV or a travel trailer over a tiny house at this point. It may also be that neighbours can see that offending vehicles can be removed, rather than those fixed in place.
The idea of a tiny house being movable is hard for people to understand. A house must be a static structure, stay in place. I don’t know how much that influences people, but I think it’s interesting that people tend to get worried about tiny houses on wheels as being a gateway to Trailer Park Land. By and large they’re okay with RV’s or travel trailers being stored on a property, but for some neighbours, living in it is a different story.

Asian Journal: And yet we see municipalities seeking ways to accommodate more affordable housing options in their communities.

Laura Hudson: Densification is a really hot topic here but the densification that’s happening in Vancouver right now is not affordable. It’s not making more dwellings more available to the middle class or young families or even people who are top earning professionals. It’s people who aren’t the top earning professionals who are building Tiny Houses, who are pursuing alternative dwellings or alternative ways of living, because they can’t afford to be in this city and have a lifestyle of any sort. They’re struggling. It bothers me that there is this separation in those discussions. We should be having those discussions together and I think Tiny Houses are a great way of bridging that. I don’t have the answers,. Probably opening up some sort of dialogue between people who are tiny house owners, and municipal planners is a good way to start. I think there is a place in the community for Tiny Homes. Typically, these people are more self-sufficient, less resource intensive than most residents. We need a set of principles and guidelines from the municipalities that will help these obviously resourceful people become part of, and contribute to, a community that would otherwise be very difficult to access.

The Asian Journal has been in touch with a number of municipal offices and councillors, to watch the development of this trend. We will report activities in this area from time to time.