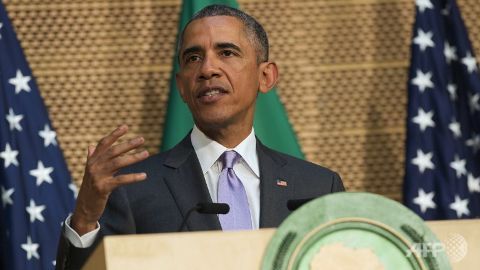 Addis Ababa, July 28 (IANS) US President Barack Obama on Tuesday ended his historic tour of Africa, saying it was time for the world to change its approach to the continent.

Obama’s speech at the African Union (AU) headquarters in Ethiopia’s capital Addis Ababa was the first time a sitting US president addressed the 54-member regional bloc.

“I stand before you as a proud American. I also stand before you as the son of an African. Africa and its people have helped shape who I am and how I see the world,” said Obama, who was welcomed with a standing ovation at the AU headquarters as he walked in.

Obama emphasised his administration’s efforts to combat world hunger while touring the factory, which is the main supplier of baby food for Ethiopian children.

He also announced $140 million in investments to the US government’s global hunger and food security initiative “Feed the Future”, which is aimed at getting climate-resilient seeds to farmers in 11 African nations.

At a joint press conference with Ethiopian Prime Minister Hailemariam Desalegn, Obama pressed the Ethiopian government to clean up its record on human rights and good governance.

He, meanwhile, drew criticism from human rights groups when he described the Ethiopian government as “democratically elected”, as a controversial election in the east African country was largely deemed illegitimate.

The US president also spoke on African leaders who refuse to step down when their terms end.

When a leader tries to change the rules in the middle of the game just to stay in office, it risks instability and strife, Obama said quoting the case of Burundi, whose President Pierre Nkurunziza has controversially been re-elected for a third term.

“Democracy is not just formal elections. When journalists are put behind bars for doing their jobs, or activists are threatened as governments crack down on civil society, then you may have democracy in name, but not substance.

“Nations cannot realise the full promise of independence until they fully protect the rights of their people. This is true even for countries that have made important democratic progress,” Obama said.

In echoes of his speech in Kenya, he condemned the repression of women, saying the “single best indicator of whether a nation will succeed is how it treats its women”.

He also echoed another message from his Kenya visit — “Nothing will unlock Africa’s economic potential more than ending the cancer of corruption.”

He said that in Africa, corruption drains billions of dollars from economies — money that could be used to create jobs and build hospitals and schools.

“Only Africans can end corruption,” he said.

The US president promised that in the process of fighting corruption and as African governments commit to taking action, the US will work with Africa to combat illicit financial flows, promote good governance, transparency and rule of law.

Obama had embarked on a five-day, two-nation trip to Africa on Friday, starting with a visit to Kenya, the homeland of his late father.