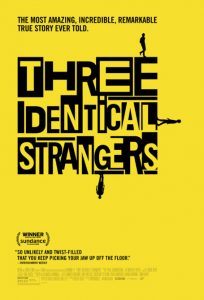 One way or another watching Three Identical Strangers gives you that this can’t be happening feeling. Above all else seeing is believing as this Mongrel Media release will leave many a head shaking wondering how this can be. Share the moment at most likely The Fifth Avenue Cinemas or perhaps the International Village compound.

Facts are stranger than fiction. Imagine the shock when you’re in a new environment and most people in the area approach you as if you had never left the community. Yet this is exactly what happens when a young college student arrives for some education and winds up learning that he is not alone! No, we’re not talking Steven Spielberg Arizona raised space gremlins hatched in some galaxy far far away a la Lucas. Apparently, the student has a double. Or three!

That would be shock enough for any system.  But three times lucky – or is that unlucky?  You be the judge as interviews, old footage and a sense of family and mystery come together beautifully in this unforgettable tale. Despite a slow start Three Identical Strangers pays off in a good way and the real key to this film’s success is the truthfulness of it all. Done documentary style it’s quirky, it’s unpredictable and kind of funky fun.