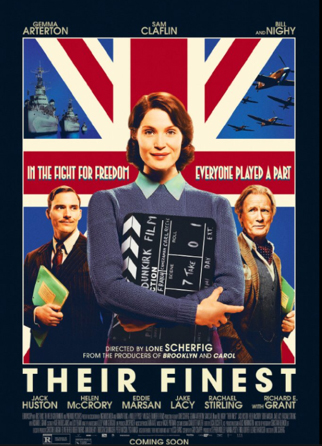 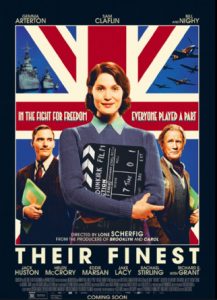 Ups and downs during war torn London are nicely depicted in The Finest. Follow the exploits of some determined civil servants charged with revving up morale in this smart and savvy well acted release from Elevation Pictures. Zero in on the fun at the Fifth Avenue Cinemas and select Cineplex Theatres around B.C.

Lost in love among the ruins in bombed out London is Catrin Cole. Given half a chance Gemma Arterton cleans up oh so well after being oiled to death in a homage to Goldfinger in the sub par Quantum of Solace to resonate as a struggling young woman trying to get by. Saddled with a nit to productive man the lass has a talent for writing.

News of an opening with the government in a well-sounding propaganda film department Ms. Cole becomes a quick study in massaging the message under the tutorship of a rather aloof man named Buckley. Times of war can bring out the worst or best in people. Sandwiched in between preparing a pro British film and a few budding romances The Finest reveals the stress and strain of a film being made and the noble efforts of men and women trying to fight the good battle against invading German bombers.

Hope springs eternal and the warmth of funnyman Billy Nighy as a hammy actor who thinks the world of himself adds some levity and a nice comical diversion to a well made effort involving some engaging personal dilemmas.  Strong and steady as she goes is The Finest. With enough unexpected twists and turns this film is full of restrained passions and characters you actually do care about.