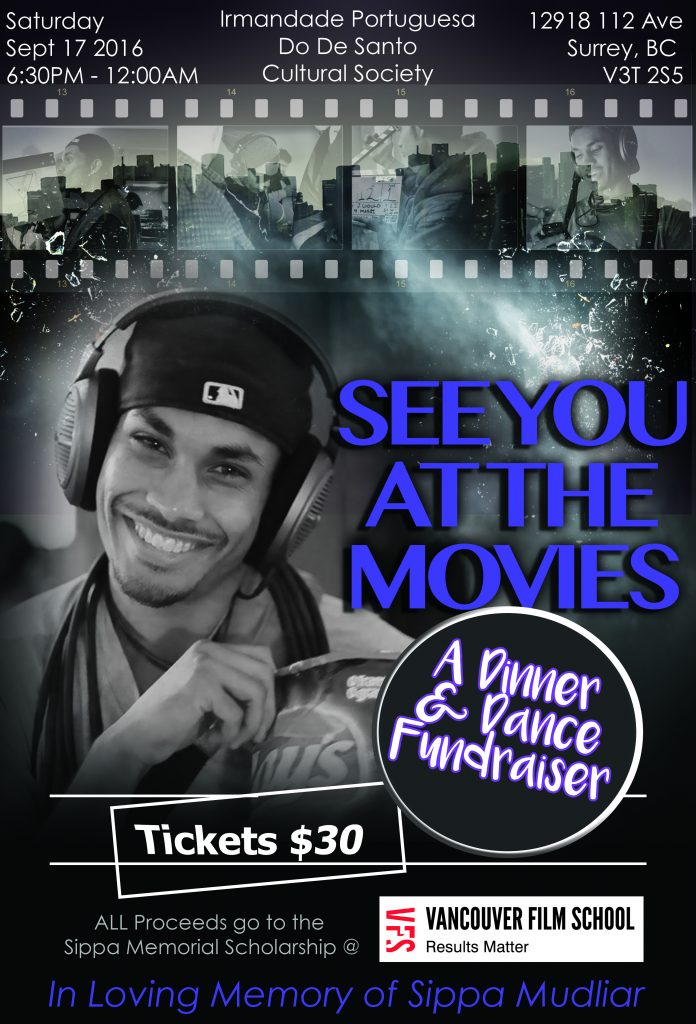 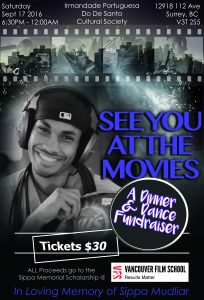 Surrey:  In hopes to create a legacy and honor a former film production student, Navlesh ‘Sippa’ Mudliar – Sonam Naidu in partnership with Vancouver Film School (VFS) presents SEE YOU AT THE MOVIES https://www.facebook.com/events/1729645220586361/ supporting ‘The Sippa Memorial Scholarship’ The dinner and dance fundraiser is taking place at Irmandade Portuguesa Do De Santo Cultural society (12918 112 Avenue Surrey, BC V3T2S5) on Saturday September 17th, 2016. ALL ticket sales, raffle/cocktail proceeds are going towards the new endowment program at VFS for a struggling student wishing to attain an education. The evening presents the remarkable opportunity to celebrate Sippa’s perseverance and passion towards film production but more importantly aid a student’s future education endeavors and journey to shoot for the stars.
SEE YOU AT THE MOVIES is a dinner and dance fundraiser that is completely exclusive, out of the ordinary and a celebration of youth talent in the South Asian community. Despite supporting a remarkable cause, the event promises a fun filled evening in the style of a movie premiere/awards gala presented through a series of passionate performances by local youth artists, award rewards for the guests in attendance and an authentic, diverse buffet style dinner.
Tickets for SEE YOU AT THE MOVIES ($30) can be purchased from the following locations:
– Bombay Couture: #112 – 8166 128th Street Surrey, BC V3W 1R1 (604.501.0888)
– Jashika Elegant Studio’s: (778.899.7535)
– Roop Shingaar Jewellers: #102 – 9172 120th Street Surrey, BC V3V 4B5 (604.501.2099)

ABOUT THE SIPPA MEMORIAL SCHOLARSHIP A new endowment program in memory of Navlesh “Sippa” Mudliar, a former Film Production student at VFS. The scholarship fund in Sippa’s name is designed to celebrate and honor his passion for the entertainment arts by awarding financial aid to a struggling VFS student. VFS is doing its part to honour its former student by offering to match funds raised at an upcoming fundraising event – SEE YOU AT THE MOVIES for the scholarship.

ABOUT SIPPA MUDLIAR
Navlesh Mudliar, known by friends and family as “Sippa,” was a respectful son, compassionate friend, protective brother, remarkable athlete and ambitious professional. Throughout his 27 years, Sippa was known to be the charismatic, funny and positive spirit in every room. A single conversation with Sippa and one would instantly adore his radiant soul and want to be in his sphere of fun and energy. Despite his nurturing, loving and hysterical antics, he had a side that was also savvy and thoughtful. Sippa naturally possessed a creative mind with an indomitable work ethic and zeal for problem solving. In pursuit of being a film director one day, he decided to attain his post-secondary education in Film Production at Vancouver Film School. He was an astounding talent behind the camera — passionate about shaping light, cinematography and telling stories. His school colleagues recognized him as a ninja with a C-stand and a Samurai with a light head. There was no hurdle too big… Sippa could do just about anything he put his mind and heart to. He passed away on March 9, 2016.

Funking it up – with Shiamak!

French town to have statue of Maharaja Ranjit Singh