Somewhat of a rarity these days are films made for children. Harder still is to discover one that is good. Able to bridge that gap and reach a high summit is Elevation Pictures with their release of the new film The Secret Garden. Young and old should enjoy the fantasy by simply dialing up your local cable company or internet carrier.
Not all people are created equal. Like it or not this truism also applies to film companies. Relatively new studio STX films deserves lots of credit for taking a chance on trying to enter the uncertain realm of children’s entertainment. Under the wise guidance of visionary producer Bob Simonds The Secret Garden succeeds in bringing an imaginative creative story to the screen at a time when a little feel good fare is much needed and welcomed. Casting means everything to the success of a movie and this fact can’t be disputed. Here the victim/heroine Of the piece is young Mary Lennox. At the ripe old age of ten Dixie Egerickx captures your soul as a spoiled child trapped in India during the ill-fated partition of mysterious India under current British rule. Left to her own devices the young lass is uprooted to rural England and left in the custody of her wealthy uncle. Here the movie kicks into high gear. Trappings of success can lead to just that: being trapped. Consider it a battle of the minds as Uncle Archibald Craven just seems a fixing for a fight with his new house guest, Oscar winning actor Colin Firth ( The Kong’s Speech) lays down the law to his latest visitor which only seems to make matters worse, as would be expected. Told not to break any of the house rules it doesn’t take long for our Miss Columbo in training to discover all sorts of secrets and family skeletons in this haunted Shanghai-la. Let the clouds clear as one day while exploring the great outdoors Our determined girl finds passage to a hidden garden which opens up all sorts of strange doors. Meanwhile back at her new home away from home a further wrench is thrown into the proceedings as a kept boy surfaces which further adds to all the mystery and family baggage that seems to run through everything at Misselthwaite Manor in Yorkshire,
Full of substance, hope and Inspiration The Secret Garden has all those fantasy elements and special qualities that will appeal to children, though it’s not all fun and laughs and does have a few serious moments . Love of family is at the heart of this tale as well as the ability to overcome adversity. For it all to work you have to buy into the plight of Mary and actress Dixie Egerickx pulls it off without missing a beat. And that great estate is as eerie and ostentatious as can be.
With a good back-up cast fit for any Masterpiece Theatre saga Including Julie Walters ( Educating Rita) and an atmosphere befitting those classic Robin Leach Lifestyles of the Rich and Famous guilty pleasure epics director Marc Munden hits all the right notes. 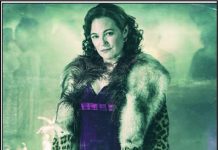