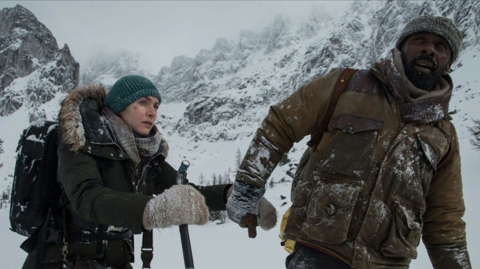 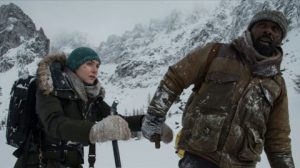 Brought together by fate, United by an instinct to survive The Mountain Between us shows just how far people will go to survive. Intended for a mature audience this 20th Century Fox grand scale drama explores both the pain and suffering two lefts for dead people endure. Check out this intimate portrait of two people in need currently haunting audiences at select Cineplex theatres across B.C.

Haste makes waste. Remember that age old saying? Well sometimes it pays to take heed as two travelers learn the hard way when they are snowed in at an airport. Busy people make decisions sometimes in the spur of the moment. Outside pressures and an urge to return home in a hurry see two unlikely unlucky souls decide to brave the elements and head out on their own.

Oscar winner Kate Winslet (Titanic) by now is used to wreckage. Substitute an airplane for a boat and handsome Idris Elba (Luther) for Leonardo DiCaprio and the dye is cast for a tale of struggle and survival among some very snowy mountainous terrain. Mother Nature can be majestic as well as death defying. Left to their own devices and cut off from the rest of the world The Mountain Between Us paints an intense emotional story of how people cope with tragedy and he darkest secrets they try to keep safe and hidden.

Startling imagery of the rugged British Columbia wilderness perfectly encompasses the sense of longing and hope embodied in these two spirited individuals.