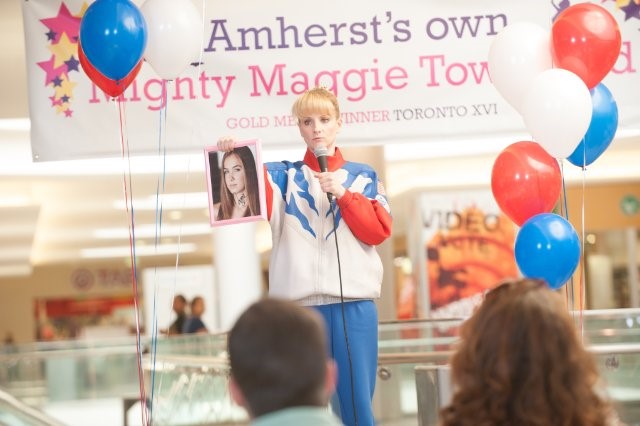 Sports gets played for laughs in The Bronze. Serious gymnastics competitions are put under the gun in this rousing dark comedy from Sony Pictures Classics. Fit for the athletically inclined this laugher is now yukking it up at Cineplex Odeon Theatres around
B.C. Such as the Fifth Avenue Cinemas.

Losing is hard to do. Down on her luck after a third place finish in the world gymnastics final is Hope Annabelle Greggory. Look for television star Melissa Rauch (The Big Bang Theory) to embark on a full scale film career as she aces the part of a dejected hero once the toast of her Amherst Ohio hometown. Second chances are few and far between but against her better judgment and eggs on by over-protective dad Stan Hope gets new hope as the coach of an up and coming star.

Sparks fly often as the competitive juices heat up on route to a gala showdown in of all places Toronto for the XVI World Championships. Apart from the mat competition director Bryan Buckley heaps more zaniness into the 108-minute movie when two diametrically opposed suitors have Hope in Their sights. Sexual lust versus nerdy innocence are wonderfully depicted through the performances of Sebastian Stan and Thomas Middle ditch. And one romantic tryst could well be the funniest bedroom scene ever imagined.
Fun from start to finish The Bronze is solid gold entertainment.

The Lovers and The Despot (PG)*** – By Shirl Hollenberg