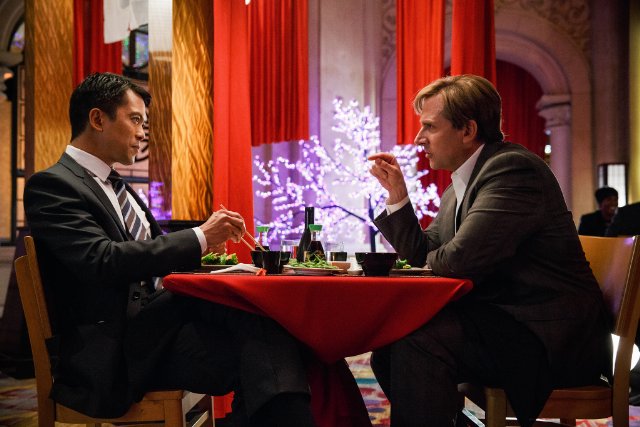 Greed is Good. Words to live by courtesy of slick hype them as he sees them Gordon Gekko in Oliver Stone’s Wall Street. Clearly the banks and corporate America haven’t learned a thing from the 80s unless you really want to double down and screw the North American public. Fet ready to be taken on the ultimate roller coaster ride in Paramount Pictures The Big Short. Director Adam McKay leaves nothing off the table in This jarring indictment of the power elite now consuming audiences at the International Villages and select Cineplex Odeon arenas still left solvent in British Columbia.
What The Big Short is all about is how a very small group of concerned financial guys saw fit to blow the whistle on the sub-prime mortgages the big banks were foisting on an unsuspecting public. Bravo performances by Christian Bale ( The Dark Knight) as Dr. Michael Burry , a financial wizard who saw through the banker’s manipulations and fraud and Steve Carrell (Get Smart) as Mark Baum, an equally screwed up investor guru who decided to go all in with a ruse to give the big boys payback.
Bouyed by sensational cameos by leading stars to help novices through the intricacies of this corporate scam and you’ll be captivated by the whole aura of greed. Director McKay does a terrific job fleshing out the villains and how they suckered the people. Engaging and inspiring The Big Shirt also features riveting work by Brad Pitt (Thelma and Louise) and Canadian heartthrob Ryan Gosling and Australian siren Margo Robbie.
Given Terrific writing and some smart cameos to help fill in the blanks that make the whole bank ponzy scheme understandable to laymen makes The Big Short an exhilarating experience. All of this happened in 2005 and this two hour film brings it all home full circle.

Making ‘Bend It like Beckham’ musical most enjoyable: Gurinder Chadha

AKSHAY KUMAR GETS FELICITATED AT NATIONAL FILM AWARDS 2019 FOR ‘BEST...