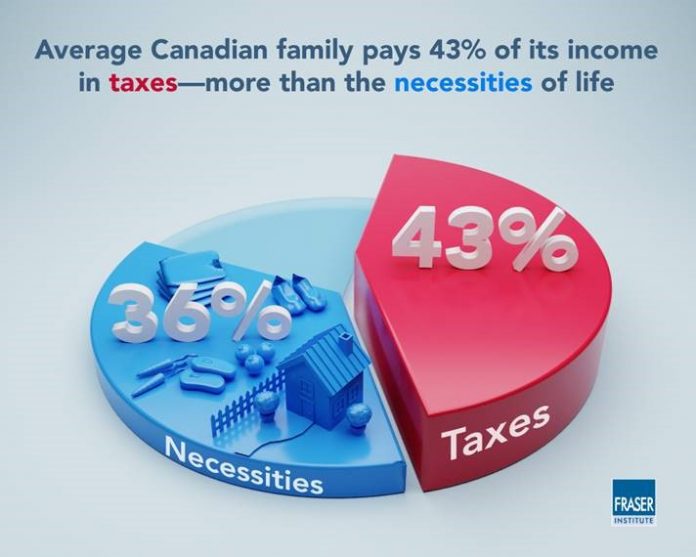 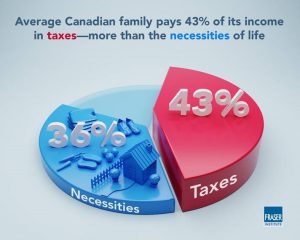 Vancouver: The average Canadian family spent 43 per cent of its income on taxes in 2017, more than housing, food and clothing costs combined, finds a new study released by the Fraser Institute, an independent, non-partisan Canadian public policy think-tank.

“Many Canadians will be surprised to learn that taxes—and not life’s basic necessities, including housing—is the biggest household expense,” said Charles Lammam, director of fiscal studies at the Fraser Institute and co-author of the Canadian Consumer Tax Index, which tracks the total tax bill of the average Canadian family from 1961 to 2017.

Last year, the average Canadian family earned $85,883 and paid $37,058 in total taxes compared to $30,597 on housing (including rent and mortgage payments), food and clothing combined.

In fact, the average Canadian family paid more than twice as much of their income in taxes (43.1 per cent) as they did for housing (20.8 per cent). The basic necessities of life, which include food, clothing and housing, amounted to just 35.6 per cent of income—still less than the percentage of income going to taxes.

This represents a marked shift since 1961, when the average Canadian family spent much less on taxes (33.5 per cent) than on food, clothing and housing (56.5 per cent).

The total tax bill reflects both visible and hidden taxes that families pay to the federal, provincial and local governments including income, payroll, sales, property, carbon, health, fuel and alcohol taxes and more.

Even after accounting for inflation, the tax bill has still increased 166.4 per cent over this period.

“Taxes help fund important public services that Canadians rely on, but the issue is the amount of taxes governments take compared to what Canadians get in return,” Lammam said.

“With 43 per cent of their income going to taxes, Canadians might ask whether they’re getting the best value for their tax dollars.”