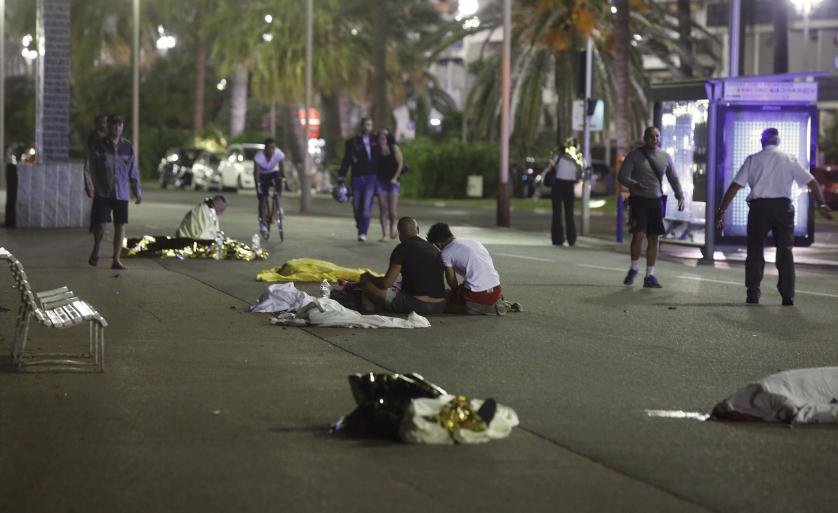 Nice: A terrorist sped a rented truck through a crowd of thousands enjoying Bastille Day celebrations in this French city, crushing 84 people and injuring some 150, a third of who were battling for life.

As global condemnation poured in, French President Francois Hollande flew to Nice, met the wounded and said the trucker struck men, women and children who had come to enjoy fireworks and music “merely to satisfy the cruelty of an individual — and maybe a group”.

No group claimed responsibility but channels known to support the Islamic State were jubilant.

The heavy duty white truck driven by a 31-year-old French of Tunisian origin drove into the crowd for two kilometres an hour before midnight on Thursday, crushing unsuspecting people before police shot him dead.

Survivors said bodies flew “like bowling pins” and people screamed in terror and ran in every direction as the killer truck, its lights switched off, ploughed through the crowd, picking up speed.

The horrific incident took place along the Boulevard des Anglais, the main street in Nice, where thousands were massed on both sides to enjoy July 14 celebrations, authorities and international media reported.

Besides driving over people, the killer trucker, identified as Mohamed Lahouaiej Bouhlel who was known to police but not to intelligence agencies in France, fired at the crowd, creating more mayhem.

Firearms, explosives and grenades were found in the truck.

It was the worst terror attack in France since terrorists struck in Paris in November 2015, killing 130 people and injuring over 250 near a stadium.

Hollande extended the state of Emergency in France for three more months beyond July 26 and called in the reservists. A three-day national mourning was announced from Saturday.

Hollande declared that the fight against terrorism would be long because “we have an enemy that will continue to strike all people, all countries that have liberties and essential values”.

In the footage captured by terrified bystanders, the sound of several gunshots could be heard. Witnesses said they watched the scene in disbelief.

“We see this truck along the boardwalk, just ploughing through people, bodies getting hit and people running in all directions,” Tony Molina, who viewed it all from his apartment, told CNN.

Journalist Damien Allemand saw the truck plough into the crowd and tossing bodies “like bowling pins along its path”.

When he first heard screams from a distance, Allemand thought some fireworks may have gone out of control. Suddenly, “a huge white truck flew by at a crazy speed, driving over people, twisting the wheel to cut down the maximum number…

“I saw bodies fly like bowling pins along its path. Heard noises, screaming that I will never forget.”

In no time, there were bodies everywhere besides limbs and blood on the street. Nice beach attendants were the first to reach the scene, bringing water for the wounded and towels to spread over the dead.

Some in the crowd jumped into the sea to save their lives. An American saw the truck “mowing bodies over” and accelerating as it hit the victims. Among the first to die was a middle-aged Muslim woman. Two of her sons and other family members stood around her body, weeping.

India joined the international community to denounce the horror.

“France was struck on its National Day … the symbol of freedom,” said Hollande. “This is France, which is under the threat of Islamist terrorism.”

President Barack Obama said the US stood “in solidarity and partnership with France, our oldest ally”. The UN condemned what it termed a “barbaric and cowardly” terror attack.

Indian President Pranab Mukherjee said he was shocked. Prime Minister Narendra Modi said: “India shares the pain and stands firmly with our French sisters and brothers in this hour of immense sadness.”

Amarinder to meet Trudeau in Amritsar