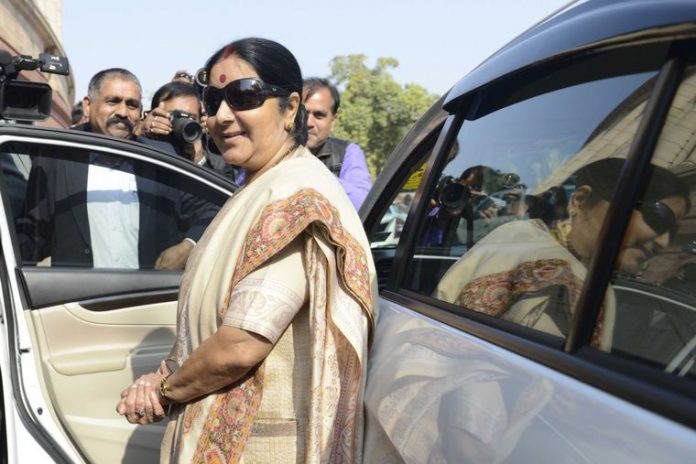 New Delhi, Dec 14 (IANS) External Affairs Minister Sushma Swaraj on Monday expressed the hope that the renewed dialogue between India and Pakistan will open a new chapter of peace and development in the region.

Making a statement on her visit to Pakistan in both houses of parliament, Sushma Swaraj said it was decided that a “Comprehensive Bilateral Dialogue” will start and foreign secretaries of the two countries will work out the modalities under the “new dialogue”.

“The new dialogue, we sincerely hope, marks a new beginning also for peace and development in the whole region,” she said.

Sushma Swaraj said India emphasised the need to speed up the judicial process in the 2008 Mumbai terror attack by Pakistani terrorists.

The minister said her meetings with Pakistan Prime Minister Nawaz Sharif and his Adviser on Foreign Affairs Sartaj Aziz in Islamabad were held against the backdrop of “positive developments” of the talks earlier between the two national security advisers in Bangkok.

“Both sides condemned terrorism and resolved to cooperate to eliminate this menace. There we dwelt on the need for Pakistan to expedite the Mumbai terrorist attack trial,” Sushma Swaraj said.

“The Indian side was assured of the steps being taken to expedite its early conclusion.”

“This government accords the highest priority to the country’s security. In order to meet the threats, the government will take all steps, including through diplomatic channels,” she added.

“At the same time, the government is also committed to building an environment of peaceful and cooperative relations with all our neighbours, including Pakistan, so that the efforts for peace and development in South Asia, initiated by the government on the day of assuming office itself, are taken further forward,” she said.

The minister said there were two aims of the dialogue: Addressing the issues of concern through dialogue, and establishing cooperative relations.

She said that when Prime Minister Narendra Mosi met Pakistan Premier Sharif during the Conference of Parties (CoP) 21 climate chnge summit meeting in Paris on November 30, “there was a discussion on how the two countries could build an atmosphere conducive for again re-engaging with each other”.

The national security advisers met in Bangkok on December 6.

“They focused on peace and security, terrorism, tranquility along the Line of Control, and Jammu and Kashmir, the state which has been most directly impacted by terrorism and violation of LoC,” she said.

“My visit to Islamabad for the Heart of Asia Conference came two days after the constructive talks between NSAs on issues related to security, terrorism, etc. My meetings with PM Nawaz Sharif and Sartaj Aziz in Islamabad were held in the backdrop of this positive development.”

Sushma Swaraj’s statement was made earlier in the Rajya Sabha amid din as Congress members trooped near the chairman’s podium and raised slogans.