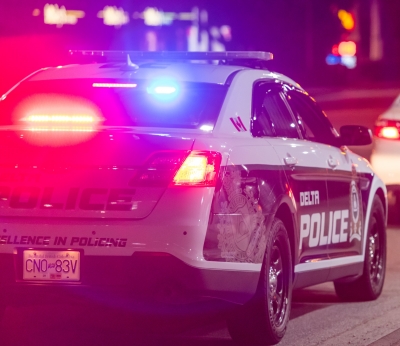 Delta: A young child has received serious injuries after being hurt in a crash involving a suspected drunk driver.

There were three people, a family, travelling westbound in the area, and a sole occupant in another vehicle travelling eastbound when the crash occurred.

Police arrested the man who was the sole occupant of the one vehicle for suspected impaired driving. He appears to have received minor injuries. The two other occupants of the vehicle with the child also received injuries that are believed to be minor in nature.

“Our officers work very hard to take impaired drivers off the road any time of the day or night, and we take that job very seriously,” says Inspector Ciaran Feenan, head of the Delta Police Patrol Section. “Incidents like this are why we are so proactive on Delta streets. Every one of our patrol and traffic officers has equipment to test for drunk driving. We share the results of our enforcement with the community on a regular basis.”

The day before this crash, Delta Police had shared on social media that they’d taken nine drunk drivers off the road on the weekend, and an additional six impaired drivers earlier in the week.

“This needs to stop,” says Insp. Feenan. “It’s absolutely unacceptable that a young child has received significant injuries. People who make the choice to drive impaired are being incredibly selfish. This incident has renewed our officers’ determination to make sure we take as many impaired drivers off the road as we can.”

There were a number of people at the scene of the crash who attempted to help those involved, and Insp. Feenan thanks everyone who called for assistance and did what they could to help.

The investigation is continuing and police are pursuing criminal impaired driving charges in this incident. The child involved in the crash was released from hospital on the weekend, and is at home now, recovering.