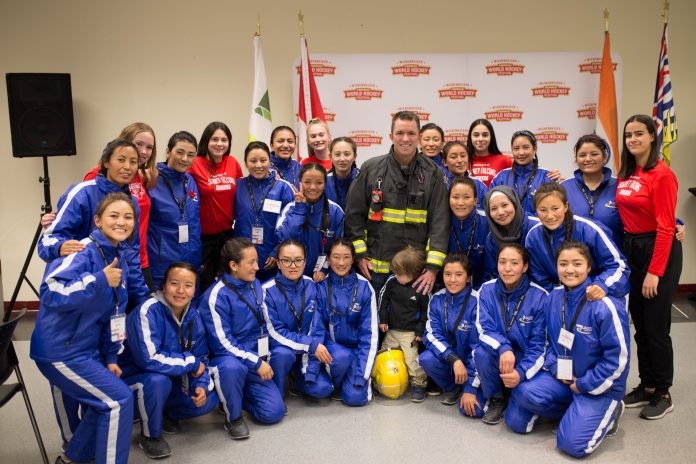 Surrey: More than 150 spectators gathered at the Surrey Sport and Leisure Complex this past Tuesday, November 13 to watch Team India take on the Surrey Falcons, in an exhibition game celebrating women in hockey. This was Team India’s first-ever trip to Canada, after overcoming the country’s strong societal barriers surrounding female ice hockey.

“We are incredibly proud to host Team India in Surrey,” said Mayor Doug McCallum. “For Canadians, hockey is not just our nation’s favorite pastime, but our international language. This event is another example of how hockey transcends borders, oceans and languages.  Surrey is dedicated to celebrating our diversity and building a strong sense of community through sport and it was a pleasure to see these two teams come together for this special event.”

After years of perseverance, determination and fundraising by a few Surrey residents, Team India’s young female hockey team arrived in Surrey for the first leg of their Canadian tour of the Canadian Tire Wickenheiser World Female Hockey Festival (WickFest) in Calgary.  The tournament is coming to the City of Surrey January 31st to February 3rd next year.

“We are elated to bring WickFest to Surrey,” said Hayley Wickenheiser, six-time Olympian and Founder of WickFest. “Our tournament runs deeper than just hockey – it promotes empowerment and leadership skills young women can use on and off the ice. The support we have received from the City of Surrey and its community organizations, like the Surrey Firefighters Charitable Society, have made this event possible.  Surrey has a diverse community that supports programming for female hockey, so it was a natural fit for us to bring the tournament here.”

Now in its ninth year, WickFest has become one of the largest and most celebrated female hockey tournaments in the world.  With over 50 teams registered from as far away as Atlantic Canada and the United States, the player registration is already sold out for the Surrey Tournament.