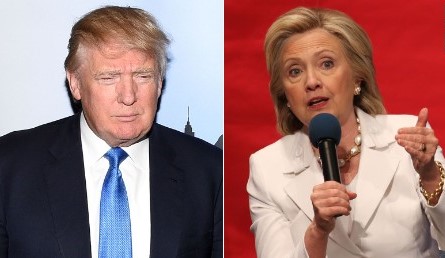 Washington, Aug 19 (IANS) There seems no stopping to ‘teflon’ Donald Trump. After quickly leaping to the top of the crowded Republican field, the real estate mogul has come within striking distance of Democratic frontrunner Hillary Clinton.

A new poll released on Wednesday found him just 6 points, 45 percent to 51 percent, behind the former first lady and secretary of state making him for the first time competitive in the November 2016 presidential race.

The CNN/ORC polls comes on the heels of recent polls showing him leading nationally, in Iowa and in New Hampshire, the first two nominating states over the 17 Republicans, including Louisiana’s Indian-American governor Bobby Jindal languishing at the bottom.

Trump who trailed Clinton by 16 points in a July poll has narrowed that gap by boosting his standing among Republicans and Republican-leaning independents from 67 percent support in July to 79 percent now.

Clinton maintains this edge in the November 2016 White House race despite a growing perception that by using a personal email account and server while serving as secretary of state she did something wrong, according to the poll.

About 56 percent say so in the new poll, up from 51 percent in March. And positive impressions of Clinton continue to fade.

But the fading numbers, CNN said, have not hurt her against some Republican contenders like Bush and Walker.

At the same time, Clinton’s lead in the race for the Democratic nomination for president is narrowing.

CNN said the new poll suggests the best way for the former secretary of state to shift the momentum would be for Vice President Joe Biden, who is still mulling a presidential run, to decide to sit this one out.

Most Democrats, though, say they would like to see Biden make a run for the White House.

Overall, 47 percent of Democratic and Democratic-leaning voters say they support Clinton for the party’s nomination — down 9 points since July.

At the same time, Vermont Senator Bernie Sanders has climbed 10 points since July and holds second place in the race with 29 percent. Biden follows at 14 percent.

Should Biden decide not to make a run for the presidency, his supporters would largely flock to Clinton rather than Sanders, boosting her numbers, the poll suggested.

Largest South Asian film festival in US from Thursday