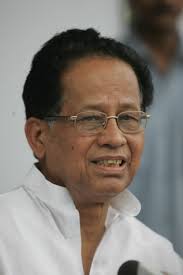 New Delhi, Oct 30 (IANS) Ahead of next year’s assembly elections, Assam Chief Minister Tarun Gogoi on Friday said that he supported all anti-communal forces but he was not planning any alliance for his Congress.
“I support all anti-communal forces be it the AGP (Asom Gana Parishad), CPI (Communist Party of India), CPM (Communist Party of India-Marxist) or (anti-government farmers’ leader) Akhil Gogoi,” he said at a press conference here.
“However, I am not planning any alliance as we are confident of winning the elections,” he said, adding that how the government would be formed post-elections was a different thing.
Assembly elections are scheduled to be held in Assam in April-May next year.
Asked if he was planning any seat arrangement with the All India United Democratic Front (AIUDF), Gogoi denied it but added that the AIUDF was also fighting communal forces.
“(AIUDF chief Badruddin)) Ajmal met me twice. I told him fight on your own and we will fight on our own,” he said.
“Ajmal’s is not a communal party like the BJP. His party has several Hindu legislators,” he added.
Referring to last year’s general elections when Bharatiya Janata Party MPs were elected from the state’s tea-growing areas, a traditional Congress stronghold, he said that the people have now “realised their mistake”.
“Tea tribes are simple people and they were given false assurances. Now one-and-a-half years later, they have realised their mistake,” Gogoi said.
Asked whether former state health and education minister and a one-time blue-eyed boy, Himanta Biswa Sarma, who defected to the BJP, would play a crucial role in next year’s assembly elections, he replied in the negative.
“They (BJP) told me you have sent us a cancer. I told them you yourselves have taken him,” said the veteran Congress leader.
On his meeting with Congress vice president Rahul Gandhi here on Wednesday, he said that election strategy was discussed.
“We discussed election strategy. We have to show our positive work. No one can beat our record,” said Gogoi, chief minister for three consecutive terms.

No Indian will be left out of NRC: PM Narendra...