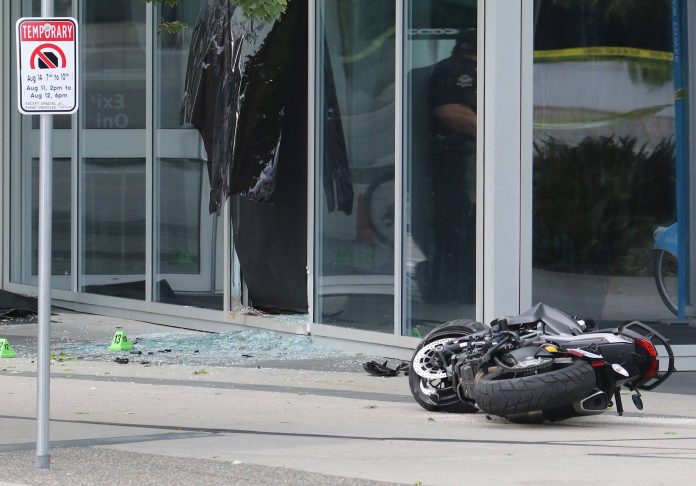 Vancouver: A female stunt driver working on the movie “Deadpool 2” has died after witnesses say she appeared to lose control of a motorcycle before crashing into a window of a building in downtown Vancouver on Monday.

A crumpled motorcycle was seen laying on its side surrounded by broken glass a few metres from the smashed window of the Shaw Tower near the city’s waterfront. Crew members appeared distraught and one was in tears.

“She lost control really quickly. It happened in a split second,” said Nathan Kramchynski, who works inside the Shaw building and watched the accident from the seventh floor on Monday morning.

He said he had been watching rehearsals of the stunt across the street outside the Vancouver Convention Centre. The stuntwoman had been riding slowly down a set of stairs and stopping when she reached the road, he said.

When it looked like the crew was ready to film the scene, Kramchynski and his co-workers rushed over to the window to watch. But that time, the driver suddenly picked up speed and crossed the street, he said.

“She kind of weaved through, almost hit a pedestrian,” he said. “She was going full throttle and then there’s a building there.”

Sharmina Kermalli was in a Starbucks on the ground floor of the tower when she heard a loud crash. She ran toward the noise and saw a woman lying inside the building, across where the glass panel had been.

Shards were still falling on the woman, and people were running over and picking glass off her face, Kermalli said.

Just moments earlier, Kermalli had walked by the spot where the crash happened, she said.

“I was thinking, what if I was just five seconds (later),” she said.

Deadpool, a Marvel Comics superhero, is played by Vancouver-born actor Ryan Reynolds. He said on Twitter he was “heartbroken.”

“Today, we tragically lost a member of our crew while filming Deadpool. We’re heartbroken, shocked and devastated … but recognize nothing can come close to the grief and inexplicable pain her family and loved ones must feel in this moment,” he said.

“My heart pours out to them, along with each and every person she touched in this world.”

A spokesman for 20th Century Fox issued a statement that said, “We are deeply saddened by the accident that occurred on the set of Deadpool 2 this morning. Our hearts and prayers are with the family, friends and colleagues of our crew member during this difficult time.”

Kramchynski, the witness who watched from the seventh floor, said a fire truck and police cars arrived “instantly” after the crash happened.

“The response was actually incredible,” he said.

He said he watched as the stuntwoman was carried on a stretcher into the ambulance, which remained at the scene for about 15 or 20 minutes before leaving.

Trish Knight Chernecki of WorkSafe BC said five investigators were assigned to the accident. Two are looking at any possible occupational health and safety issues while the other three are examining the cause of the crash and prevention in the future, she said.