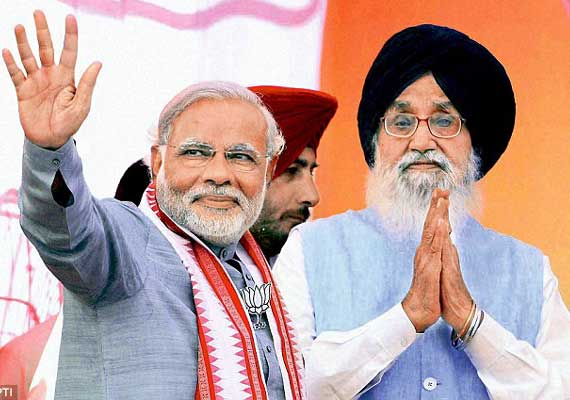 In recent weeks, the ties between the allies have again undergone a reaffirming test from top leaders after actions and utterances of state leaders of both sides clearly pointed to differences.

The BJP leadership, by occasionally raking up differences, is certainly testing the political waters to check if it can go alone in the 2017 assembly polls. Leaders of both the parties know for sure that they cannot encroach on each other’s votebank as the Akali Dal is strong in the Sikh-dominated rural Punjab and the BJP has its hold on the Hindu-dominated urban areas.

Badal senior and Jaitley had to even categorically say that the alliance was strong and would continue.

The chief minister, at a recent media interaction, was even more specific in stating that the allies would contest the assembly polls together.

But at periodical intervals, top leaders of both sides have to reaffirm that the alliance is strong enough and is likely to continue.

Having been in power in the frontier state of Punjab since 2007, including the alliance returning to power in the 2012 assembly polls, there have been occasions when their leaders have differed on certain issues.

A recent provocation was the Punjab government openly favouring Khalistan-linked activists and convicted terrorists and seeking that they be shifted to prisons in Punjab. The BJP, which has made its stand clear on dealing with terrorism and terrorists, was clearly upset.

Even on other state-level issues, differences have cropped up between ministers and legislators of both sides.

Industry Minister Madan Mohan Mittal, a BJP man, has made his displeasure known about the manner in which decisions regarding his key portfolio were being taken by Badal junior. These are especially related to policy issues, announcements and new plans.

Another BJP minister, Anil Joshi, has had run-ins with Akali Dal leaders and ministers in the past.

At times, leaders from both sides have taken a stand on issues and given vent to feelings through the media. But then, the senior leaders from both sides, after watching matters for some time, intervened to stop things from aggravating. Badal senior had to recently say that the relations between the two sides were not “strained”.

Even after the photo-ops and camaraderie of leaders of both sides, issues will keep cropping up at the state heads closer to the elections to the 117 assembly seats. The BJP, which has been the smaller partner to the Akali Dal so far, is likely to seek a bigger role or even decide to go it alone like it did in Maharashtra and Haryana last October.