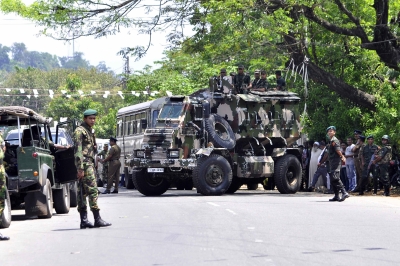 Colombo: Social networks across Sri Lanka were blocked on Wednesday by the government as around 600 troops were deployed in the central district of Kandy, where incidents of violence between Muslims and Buddhists continued for the third consecutive day despite a state of emergency.

The government declared a 10-day state of emergency on Tuesday following communal violence in the Buddhist-majority island nation. Businesses and schools across the Kandy district remained shut, Efe news reported.

Police clamped an indefinite curfew on Sunday night in Kandy where the violence has been centred following the death of a Buddhist man in an altercation with a group of Muslims.

Following the man’s burial on Tuesday, a wave of disturbances broke out in Teldeniya, where supposed radical Buddhists burned a mosque and some 100 shops.

The Telecommunications Regulatory Commission first ordered Internet operators to block social networking sites and instant messaging applications in Kandy and then extended it to other parts of the country.

According to Army spokesperson Brigadier Sumith Atapattu, nearly 600 troops were deployed to bring the situation under control, which were supporting the already strong police presence in the affected area.

According to reports, there were at least two incidents of violence on Wednesday morning.

The government extended the curfew in the Kandy administrative region after Buddhist mobs continued to attack places of worship, houses and shops belonging to Muslims.

“This is communal violence, very different from a war situation. The groups that are causing violence are not armed. We are using minimum force to control the situation,” Chief of Defence Staff Admiral Ravindra Wijegunaratne said at a press conference.

Police spokesman S.P. Ruwan Gunasekera said 24 people had been arrested over the Buddhist man’s killing so far. Out of the 24, 10 were directly involved in the killing of the victim while 14 people were arrested on suspicion.

The body of a 28-year-old Muslim man was also recovered in Kandy province. His house was allegedly set on fire by Buddhist radicals.

These are the worst communal clashes in Sri Lanka since 2014, when violence between Muslims and Buddhists in two cities in the southern part of the country had left four people dead and 16 injured.