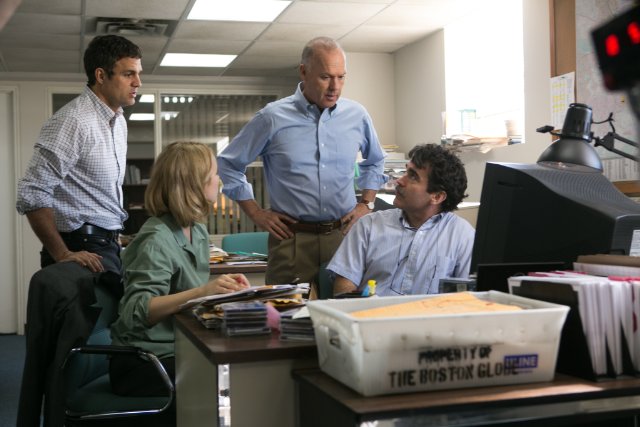 Organized religion gets put under the gun big time in Spotlight. Inspired by a true story EOne Entertainment takes the wraps off papal misgivings that touched the heart and soul of a nation. Share the truth and contempt laid bare in This faithful recounting at Cineplex Odeon cinemas around B.C.

Abuse of power goes against all the teachings of the church. Or so it was thought. Rumours become  reality when a crack team of journalists at The Boston Globe zero in on religious sanctioned crimes against the young and innocent in this stylish dramatic head turner. Led by journalist Michael Keaton his team of three go on a relentless hunt for the truth. What they find reaches the highest levels of Boston society in A scandal that would rock the city, the state, the country and the world

Not taking no for an answer are the reporters who are well represented by Mark Ruffalo, Rachel McAdams and Billy Crudup who at every turn seem to be misled and lied to. Conspiracies run deep in This true story that show how men of the cloth took sexual advantage of young boys (and girls) and how the system allowed  them  To go unpunished for  a long, long time. Far Too long.

Further gutsy performances from compelling actors Liev Schreiver and Stanley Tucci help reveal the inner roadblocks cast their way. Tense and painful at times to hear and watch the reenactments of the victims and the determined efforts by so-called “professionals” to gloss over and hide the truth will leave viewers stunned In  Disbelief and angry as hell that no one did or said anything until members of the press took up their cause.

Knee replacement may be bad for your heart