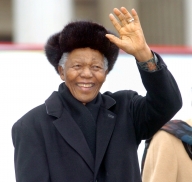 The celebrations began in earnest last week and on Tuesday former US President Barack Obama delivered a speech to a packed gathering of 15,000 people at an event organized by the Mandela Foundation in Johannesburg.

Solidarity initiatives and small tributes sprung up across the country to honour Mandela’s legacy of struggle as a freedom fighter.

On Sunday, a run was held in Johannesburg through 27 historical points — the same number of years Mandela spent in prison for fighting the racist system of oppression imposed by the country’s white minority.

Charity initiatives included blanket campaigns for the homeless, garbage collection and the construction of housing for low income citizens, with the Mandela Foundation announcing on Twitter that its staff would be “building 100 homes to mark #Mandela100 and packing food parcels”.

In the city of Cape Town, a mural of Mandela’s face was made with 29,000 food cans, to be distributed among disadvantaged communities.

Mandela, who was born on July 18, 1918 and died on December 5, 2013, was jointly awarded the Nobel Peace Prize in 1993 with Frederik Willem de Klerk, South Africa’s white former President who in the early 1990s helped dismantle apartheid “when he realized that the apartheid system was leading to both economic and political bankruptcy”, according to the Nobel Prize’s website.

Thirteen injured in clashes ahead of Delhi polls