By the folks with huge hearts!

The shocking truth about child abuse is, more than sixty percent of child abuse cases go unreported; 1 in 3 Canadian girls and 1 in 6 Canadian boys will experience an unwanted sexual act; ninety percent of abusers are known to their child victims; children with disabilities are four times more likely to experience violence as their non-disabled peers.

It’s a difficult area to police and administer to the victims, to help them and family members recover some equilibrium and move on to a healthy and balanced life afterward.

Since 2012 there has been a safe harbour in Surrey, under the famous Yellow Umbrella, of the highly respected Centre for Child Development. This special Child Advocacy Centre, brought together, under one roof, the services of the Surrey RCMP, Ministry of Children & Family Development, the City of Surrey and the Ministry of Public Safety & Solicitor General.  Named after their patron, Sophie Tweed-Simmons, the daughter of KISS singer and bassist Gene Simmons and Canadian model and actress Shannon Tweed, this special place was dedicated to children who are victims of physical, mental or sexual abuse.

Discreetly housed in the Centre for Child Development in Surrey, the facilities are designed to provide both the child and family with friendly, non-threatening décor for all meeting and interview rooms, to foster an atmosphere which will minimize the trauma which often accompanies those in need of the centre’s services.

On site are the offices of the Surrey RCMP’s Child Abuse and Sexual Offence Unit (CASO) so officers are immediately at hand to conduct their investigations and interviews around the abuse incidents in the least intrusive, supportive way possible. Working with the officers are Baily Keeler providing Victims Services and Justyna Litwinska.

The facility is set up in a way that the child is interviewed by one officer while another observes from an adjacent room. The evidence is recorded, and sealed in an evidence bag for the court and it is hoped that eventually the children will not have to appear in court and avoid further trauma.

Judy Krawchuk, the Vice President of the Child Development Foundation of BC and Director of Sophie’s Place holds the team members in high esteem.

“I can’t say enough about them,” she said, “This is a psychologically healthy workplace, and we’re actually working on a manual of Best Practices, which could be rolled out to help other groups of first responders, such as paramedics, fire fighters, police or other Child Advocacy Centres.”

“We provide a best-practices model where abused children can receive the services they need from a multi-disciplinary team. That team includes members of the Royal Canadian Mounted Police (RCMP), social workers of the Ministry of Children and Family Development (MCFD), victim services workers of the Ministry of Public Safety and Solicitor General (MPSSG), and a children’s support coordinator of The Centre for Child Development.”

It’s a busy place yet there is an air of quiet and comfort about the offices. It’s a place where the recovery from one of the worst injuries any child can experience begins. 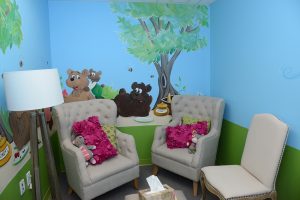 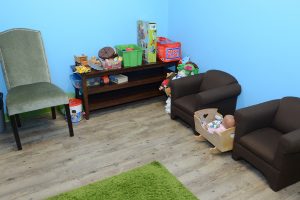 As Director Krawchuk says, “Sophie’s Place has provided support for over five hundred children in the five years since we began.”

But they need the help of the public. They need over $150,000 each year to operate, and ask that people support the work by donation or participation in the various fund-raising activities they hold throughout the year. They look to the business community to help as well as the individuals in the community for this. Recently the Gurdwara Dukh Nivaran Sahib presented Sophie’s Place with a cheque in the amount of $18,000 from funds raised at the event In Remembrance of Sahibzaade.

Remember, if you are aware of a possible case of child abuse in British Columbia, or have reason to believe that a child has been, or is likely to be, physically harmed, sexually abused, sexually exploited, or needs protection, you are legally responsible to report this information to the Ministry of Children and Family Development. Your immediate action can prevent further child abuse and help the family, and as long as your report is made in good faith, you are not liable for any loss or damage. You can help stop child abuse.

For more information about the Child Advocacy Centre and information on how you may provide assistance to them, go to the-centre.org/sophies-place/

Nanaimo man charged for the three vehicle collision on Highway 1