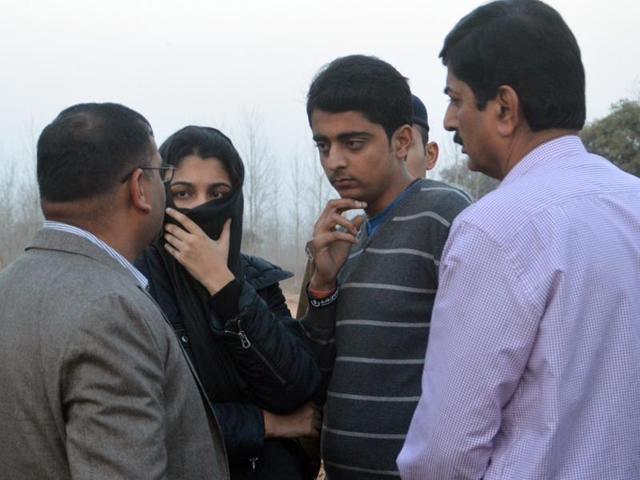 Ghaziabad, Feb 15 (IANS) A hardened criminal arrested for abducting a young woman executive here says he fell in love with her over a year ago and desperately wanted to marry her.

Devendra, who says his heroes are Hitler and Shah Rukh Khan, lured some of his friends into the kidnap drama, saying the woman’s father was a rich man and would cough up huge sums of ransom money.

But the kidnapping went all wrong, and police ended up arresting Devendra and his accomplices Pradeep alias Fauzi, Mohit, Faheem and Majid.

A resident of Haryana with 30 criminal cases against him, Devendra told police that he bought two auto-rickshaws, became an auto driver, began living in Ghaziabad for three months and conducted 150 recces to plan how to abduct executive Deepti Sarna of Kavi Nagar here.

Ghaziabad Senior Superintendent of Police Dharmendra Yadav told the media on Monday that Devendra first had a glimpse of the “beautiful girl” with her boyfriend at the Rajiv Chowk Metro Station in Delhi in January 2015.

He knew she returned home via the Vaishali station here, and so decided to strike there.

On February 9, Devendra had his auto-rickshaw outside the metro station. His friend Pradeep was in another parked auto-rickshaw.

Not aware anything was amiss, Sarna got into Pradeep’s auto-rickshaw. At one point of time, Devendra punctured Pradeep’s auto’s tyres after it had covered about three to four kilometres. She then boarded Devendra’s auto.

At that time, Mohit, Faheem and Majid were with him. Another woman passenger in the auto-rickshaw was dropped and the vehicle took a turn to a different direction. A frightened Sarna telephoned her father.

The line was cut, and the men made her a prisoner. They snatched her bag containing a laptop and dumped it. Her mobile was snatched and hidden at a construction site.

But things began going wrong. A car which was to have been used to drive her farther away suffered a flat tyre.

They proceeded in another auto-rickshaw but its CNG fuel got exhausted.

A desperate Devendra telephoned his brother Jitendra to send his car, in which they went to Khera Hatana village in Baghpat. There, Sarna was kept hidden in a sugarcane field at night.

The next day, they had to walk as their car got stuck in sand near the Yamuna river. Reaching his village Kaan, Devendra thrust her into a newly built house.

But on February 12, the kidnappers had a change of heart — and left her at a small railway station.

“Before leaving her at the station, he asked her if she was leaving him as a friend or a foe,” officer Yadav said.

During his interrogation, Devendra said he was inspired by Shah Rukh Khan’s role in the movie “Darr”.

Devendra told police that he wanted to marry Sarna and start life anew in Nepal. But that was not to be.