“With so much production work occurring in Surrey, it is only logical for Skydance Media to make the City of Surrey a home rather than a destination,” said Mayor Linda Hepner. “With the opening of Skydance Studios in Newton, the media company will have direct access to our local professionals who work within the film and television industry. The City of Surrey along with the Metro Vancouver region will benefit from the $100 million dollars a year and the 400 jobs that Skydance Studios will inject into our local economy.”

The conversion of the former printing plant for the Vancouver Sun and Province on the 13.8 acre site, created a five-sound stage facility with more than 75,000 square feet of production space, housing one of the world’s longest and tallest sound stages at 460 feet long and 50 feet high. A unique feature is the ability to make it rain – on demand – inside the largest of the five stages. The first production slated for Skydance Studios will be the science fiction thriller Altered Carbon on Netflix.

“As we are focused on expanding our operations and increasing our film and television output, the establishment of Skydance Studios is an important milestone both for our Company and for the City of Surrey,” added Skydance Media CEO David Ellison. “We are incredibly excited about putting down new roots in Surrey and becoming a part of the community’s future growth.” 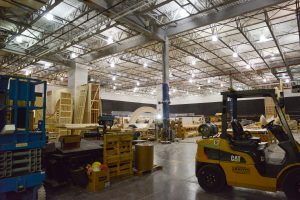 “We recognize that a vibrant film and digital entertainment industry creates long-term stable jobs in B.C., which is an important driver of our BC Tech Strategy,” said Amrik Virk, Minister of Technology, Innovation and Citizens’ Services. “Skydance’s new studio is a major media production and will further our reputation as a growing cluster for visual effects and digital animation.”

“When a company comes here they want to know if they can find the talent the production skills,” continued Virk. “They look at the tax structure, they look at the climate and they look at the diversity of the population. We have all of that in the back yard.”

Also on hand was Peter Fassbender, MLA for Fleetwood and Minister of Community, Sport, Cultural Development. “As part of our jobs plan and even in my current role I announced the Creative Economic Strategy which focuses on the opportunities for great careers in the creative sector which includes film, music and all of those things. This studio as well as the others is going to make a huge contribution. I see it being well served by SFU with its Mechatronics programs, University of the Fraser Valley and Kwantlen. A lot of the institutions are providing programs that lead in to careers that fit into this for sure.”

Peter Lietch, President of North Shore Studios and Mammoth Studios, and Chair of the Motion Picture Industry Association of BC, a long time key player in the film industry on the west coast, was on hand for the launch.

“It’s nice to see it expand to communities that are thriving like Surrey,” Leitch said. “Obviously there’s a lot of creative talent out here and it’s nice for them to work in the same city they live in. From North Shore Studios, the facilities in Burnaby and Vancouver, we’ve got the region covered from the mountains to the border. It’s great for our economy and we certainly hope to attract more new talent to the industry.”

Skydance Media is a diversifi 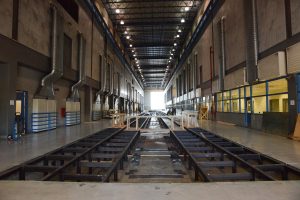